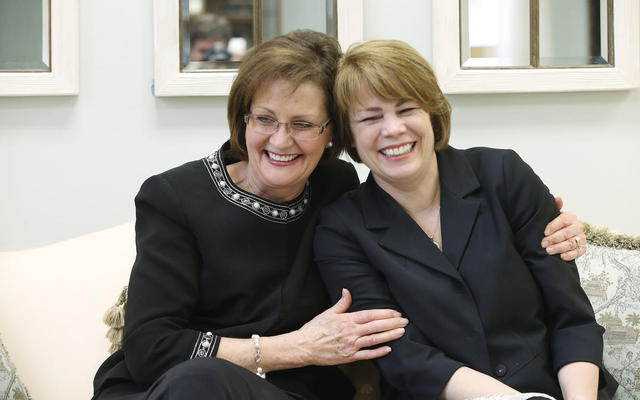 "I've always thought if the women of the church all wanted the same thing, step back," said Sharon Eubank, the director of humanitarian services at LDS Charities. "I've really felt that before, and this was an opportunity for that to happen."

Mormons have doubled donations to their faith's humanitarian fund and have sustained that giving for the past 18 months, fueling expanded LDS Church efforts to help refugees worldwide.

The Deseret News has learned that the additional money and the global response to the "I Was a Stranger" initiative launched at the women's session of general conference a year ago powered a record year for The Church of Jesus Christ of Latter-day Saints in terms of humanitarian contributions, expenditures, international partnerships and more, according to exclusive interviews and data provided in a fresh report by the Welfare Department.

LDS Charities conducted 488 refugee relief projects in 54 countries in 2016, according to its new annual report. About 250 of those projects took place in Europe, where tens of millions of refugees are fleeing persecution and war to gather in new camps under poor conditions. Older camps, some established decades ago, are being forgotten, and the church is engaging in efforts to provide fresh relief.

The church built important new relationships in the past year that have increased the faith's profile and reach with major world partners and created opportunities for its general women leaders to travel with international relief agencies.

Meanwhile, hundreds of thousands of Mormon women and girls responded to "I Was a Stranger" by simple acts of kindness and relief for refugees recorded with the hashtag #iwasastranger. More than 90,000 messages about those acts have been sent, many of them captured at the bottom of the home page of the website iwasastranger.lds.org.

"We knew we had a sleeping giant," said Sister Linda S. Reeves, second counselor in the Relief Society General Presidency, at a small presentation at the Church History Museum on Thursday night. "It's been fantastic to see all that women and their families across the world have done."