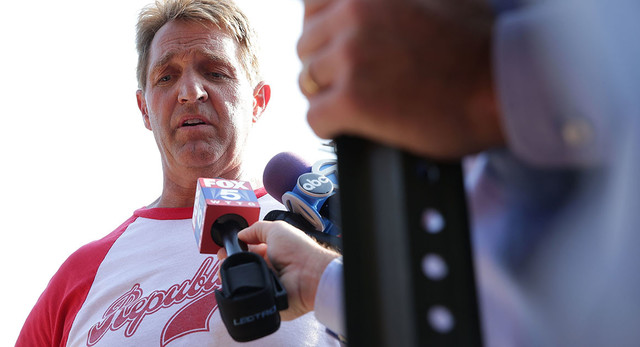 "I Saw Shots Coming Near Us": LDS Senator in Virginia Shooting Lauded as Hero, Receives Call from Obama

A Mormon and Arizona senator,  Jeff Flake, was dubbed "one of the many heroes to emerge" by The Week after the shooting during a congressional baseball practice just outside of Washington, D.C.

Distraught over the outcome of the presidential election, a gunman, James T. Hodgkinson, opened fire on members of the GOP congressional baseball team, leaving House Majority Whip Steve Scalise in critical condition and injuring four others. After exchanging fire with members of Capitol Police security detail, Hodgkinson was wounded and later died.

Sen. Flake was at-bat when the shooting began. "All of a sudden we heard a very loud shot. Everybody thought, that sounds like a gun. The gunman was over by the third-base dugout with a view of the field. A couple more shots and we knew what it was," Flake told CNN. "I remember seeing some gravel, shots coming near us. We climbed into the dugout and tried to get our own people engaged, some people were calling 911." Flake could tell the gunman had "a rifle of some sort . . . [and] a lot of ammo," according to the Associated Press.

As people sat in the dugout, helping apply pressure to a man's wounded leg, Flake recalls, "We could see Steve Scalise in the field. He dragged himself from near second base into the field just to be further from the gunman. I wanted to get to him but there were still shots going overhead from both sides."

As soon as the shooter was down, Flake and Rep. Brad Wenstrup rushed out to Scalise and began applying pressure until the medics arrived. While with Scalise, who was "coherent the whole time," Flake took Scalise's phone and called the wounded man's wife to let her know about the attack, not wanting her to hear the news first from TV or online reports.

Wednesday morning, former President Barrack Obama reached out to Flake, hoping he would pass along his sympathies to Scalise. "He just said, 'I hope that this does bring more unity,' and he wanted me to pass on certainly his regards if he wasn't able to get to Steve or others before me that he was praying for their good health," Flake told CBS News. "It was a nice call."