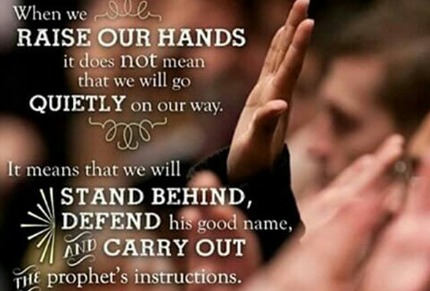 At least five people participated in vocally opposing the leaders of The Church of Jesus Christ of Latter-day Saints. The group, Any Opposed?, encouraged members in good standing who oppose the leadership of the Church to attend the Saturday afternoon session of conference and when the opposing vote is asked for, to stand with the hand raised to the square and say “opposed.” The group also encouraged participants to “bring a letter addressing your reasons for voting opposed so that you will have something to give to a church representative if given that opportunity.”

Uchtdorf acknowledged the opposing votes stating, “the vote has been noted.” After all of the votes had been taken, Uchtdorf thanked the members for their “faith and prayers in behalf of the leaders of the Church” and encouraged members who opposed any of the proposals to contact their stake presidents.

Many members in support of President Thomas S. Monson and the other Church leaders have responded in the way of today: social media. The #isustain campaign has flooded Facebook, Twitter, and Instagram with users posting their love and support for their beloved leaders.