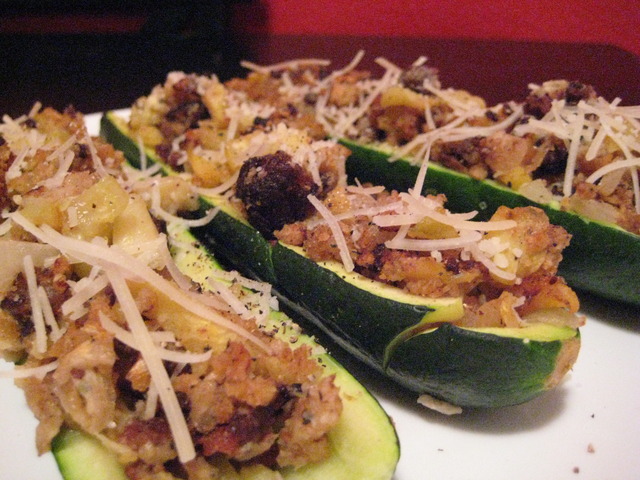 Amid the many berries and other foods bursting forth abundantly during the summer, zucchini can sometimes get neglected. And seeing as how this vegetable tends to burst forth in copious amounts, we began to search for delicious ways to use it. Once we found Brenda Stanley, author of The Zucchini Houdini, we knew our search was over. She agreed to give us some recipes for our July/August 2011 issue. (Click here to see all the recipes.) Encouraged by the recipe titles, we decided to put a few of her recipes to the test – and we got great results.

Zucchini Boats
Kaela Worthen Gardner, Associate Editor
It's not often that food with great eyeball and taste bud appeal also happens to be ridiculously easy to make, but this recipe fits the dish. It's an extremely forgiving recipe for those who don't consider themselves competitors for the next season of Top Chef Masters, because you can vary the ingredient amounts infinitely and they'll still come out tasting good. I made a half recipe of everything but used extra zucchini because I love veggies and the full amount of egg (it's hard to use half an egg). You can use minced jarred garlic if you don't have fresh on hand, and regular bread crumbs with Italian seasoning sprinkled in is easier than running out to buy seasoned breadcrumbs you may not use again. (Unless you decide to make this recipe again. Which wouldn't be a bad idea.) Be warned, though--the recipe says it serves eight, but I ate two servings and my male friend ate three, so plan accordingly for your family's needs.

Easy Cream Cheese Zucchini Soup
Erin Hallstrom, Associate Publisher
Confession: I didn't think this soup would taste very good. It only has 3 ingredients (well, 4 if you count water) and it is so easy to make that I thought: "How good could it really be?" Well, I am pleased to say I was very wrong. This is a perfect starter soup for an early fall dinner party or just a light dinner with some bread on the side. It has great flavor and a nice creamy texture. I used the 1/3 less fat cream cheese and didn't think it suffered at all from a lack of flavor. One warning for those of you new to mixing hot things like soup in a blender . . . start your blender on low and then work up to the higher speeds. If you start at a higher speed you may deal with splattered soup all over your kitchen and self. I only share to spare you all from the demoralizing activity of picking out bits of zucchini from your hair.

Zucchini Chocolate Chip Cookies
Jamie Lawson, Managing Editor
If you're a regular reader of LDS Living, you know that I don't really know how to cook or bake. So as a neophyte to using zucchini as an ingredient, I made the mistake of not grating the zucchini more finely. My boys eyed me suspiciously as I began mixing zucchini into what otherwise appeared to be perfectly good chocolate chip cookie dough. (Though the fact that I was baking cookies was suspicious enough since I do it so rarely.) The verdict? It was a mixed bag at my house. My older son wasn't crazy about the combination of cinnamon and chocolate, but my younger son, who is not a fan of veggies in general, loved the cookies, and so did I. They have a light, cake-like texture, and I thought the cinnamon was a nice touch. Aside from a few zucchini pieces conspicuously protruding from the cookies, they were a success.

Artichoke Zucchini Quiche
Kate Ensign-Lewis, Contributing Editor
This recipe calls for 3 cups of grated zucchini. Bleh! Grating rates up there with cutting raw chicken on my list of least favorite cooking chores. So let me take a moment to laud the qualities of the grating attachment of the food processor. In the six years I've owned and loved my Cuisinart, I have never once used that attachment – until I made this. Oh, the hours I've wasted! I had three zucchinis grated in literally 45 seconds. It's a revelation. Because of the processor, I had the quiche ready to go into the oven in about 10 minutes.

As for the recipe, it, too, is a revelation. I was fully expecting it to be lackluster (I haven't had a lot of success with zucchini in the past), but my first bite was amazing, as were the fourth and fourteenth. Even my husband, a self-proclaimed meatophile (he told me to say that) who rarely eats vegetables thought it was delicious. (Although, in the interest of full disclosure, he did say it would be even more phenomenal with bacon – of course). The only change I made was to mince the garlic instead of crush it; I was lazy. I believe I'll be making this again, perhaps with a little bacon to satisfy my meat man.