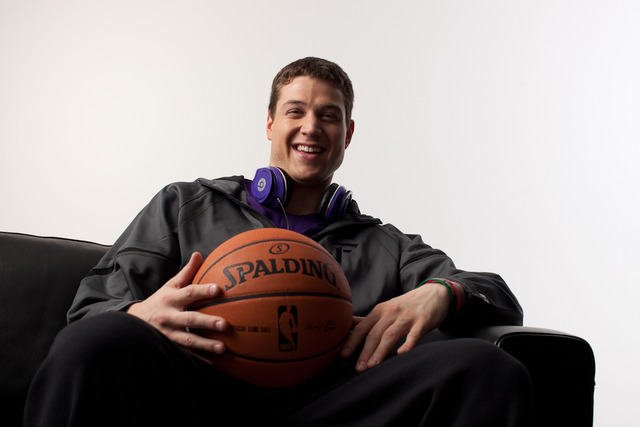 I recently interviewed Jimmer Fredette for an article in LDS Living’s January/February issue (click here to read an excerpt). The 6-foot 2-inch point guard was quiet but friendly and incredibly down to earth. And it was clear that he has earned every accolade he has received.

Jimmer told me he had dreamed of playing in the NBA since he was five years old. But he did much more than dream—he practiced relentlessly to achieve his goal. “Now I have to set a new goal: to be the best player in the NBA,” he said with a smile.

Jimmer grew up in a tight-knit family in upstate New York. But did you know that while Jimmer’s father, Al, is a member of the Church, Jimmer’s mother, Kay, is Catholic? Despite their religious differences, Jimmer says his mother has been very supportive of the LDS faith.

“She wanted us to be raised LDS because she likes the lifestyle,” he explained. “She saw that there were good people involved in the Church.”

Jimmer said his parents let their children decide for themselves if they wanted to be baptized. “I didn’t get baptized until I was ten,” he recalled. “I didn’t go to Primary all that often when I was younger. I think that’s why I waited.”

As he has risen to fame, Jimmer has taken every opportunity to share his beliefs with the media, fans, and fellow players. “The gospel has been a huge blessing in my life,” he said. “I love the Church and want everyone to know about it.” He also said he and his fiancée, Whitney Wonnacott, will rely on the gospel to keep them strong as they adjust to a new life in the NBA.

I’m grateful to Jimmer for his willingness to speak with us at LDS Living, and I wish him all the best in his career and his upcoming marriage. Hail to the Kings!

To view our photo gallery from our photoshoot with Jimmer, click here.

To check out some photos from Jimmer's childhood, click here.

To check out some behind-the-scenes video from our photoshoot with Jimmer, click here.