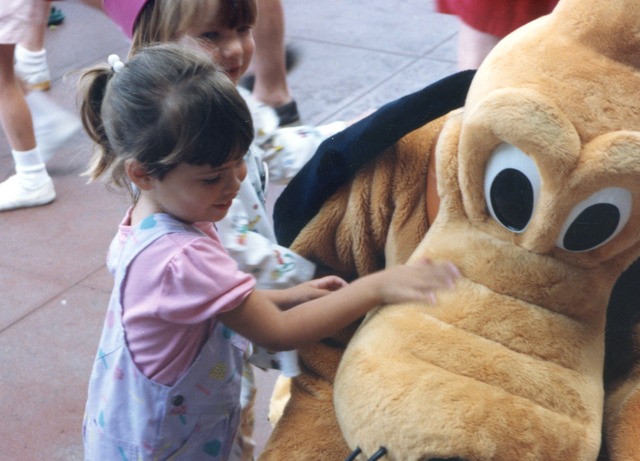 I love Disney. It has been ingrained in my being.

Scattered among the pictures of my childhood are happy images of my exploits in Disneyland. There’s the picture of my brother pulling four-year-old me up as I pull on the Sword in the Stone; seven-year-old me in a family holiday photo next to Walt Disney’s statue; 11-year-old me with my best friend just before she moved; and 18-year-old me in front of the Sleeping Beauty castle on my birthday. Considering it was an eight-hour drive for our family of seven, I’m astounded that my parents made such an effort. My family has gone for birthdays, holidays, and as part of multi-family trips, where we meet up with friends or extended family at the park. I have souvenirs including pennies flattened by the main street penny machine, Mickey Mouse hats with “Katie” scrolled on the back, and a Beauty and the Beast snowglobe that plays “Beauty and the Beast.”

Growing up, Disney (channel or movies) was also the only thing we could watch on Sundays, and the annual Disney movie release was always a theater-going event. We had piano books and CD collections. I still enjoy watching Disney movies as an adult. And most recently, I have been playing YouTube Disney songs for my bouncing three-month-old during the day and singing him the slower songs at bedtime.

This Disney devotion might seem singular, but I know I’m not alone in Mormon culture.

When LDS Living ran its “Favorite Disney Song” poll, some of us were astounded at the response. To be honest, I wasn’t. There’s something about Disney that strikes at the heartstrings of Mormons everywhere. I’ve been thinking for the last week about why this may be. Perhaps it’s because Disney represents good memories of wholesome, family entertainment. It reminds us of years gone by sitting with the family on Sunday evening to watch “The Wonderful World of Disney.”

Or, perhaps it’s because there’s something inherently good in Walt Disney’s dream—appreciating the sweet magic of children and trying to reclaim that purity and hope in the world. We are a people who, after all, strive to become more child-like. Why wouldn’t such an appreciation of goodness speak to us?

But, as I realized just a few nights ago, perhaps more than anything it is because (as a combination of these things) Disney entertainment allows us to simply feel good. Here’s what happened: Just before bed, my husband and I had been watching a TV drama that had a fascinating storyline but was also very intense. He had drifted off, but I was still wide awake. I felt that uncomfortable, anxious feeling that comes from watching something that throws you off-kilter, and being one that dreams about what I watch, I needed to watch something that would get my mind settled again before falling asleep. My first thought was Tangled, which was recently added to Netflix’s instant play selections. I knew the happy story and beautiful songs would help put my mind at ease. And it did.

I know Disney is not infallible for its selections, but on the whole, I would say it matches up pretty closely with our culture’s gravitation toward hope, happiness, and family. And while I know Disney holds a special place in the hearts of adults everywhere, I can’t help thinking it’s something special for our culture—at least for the grown ups among us who are just as excited to see the new animated movies as our children are and who look forward to going to Disneyland just as much as our children.

I, for one, can’t wait to see my little boy at Disneyland, mouse hat in tow, for the first time—with me returning to childhood by his side.

Why do you love Disney? What’s your favorite Disney memory?

Kate Ensign-Lewis loves cooking in her tiny kitchen, eating great new foods with her husband, finding good entertainment and art, and smothering her son with kisses. She likes (virgin) pina coladas, but does not like getting caught in the rain.