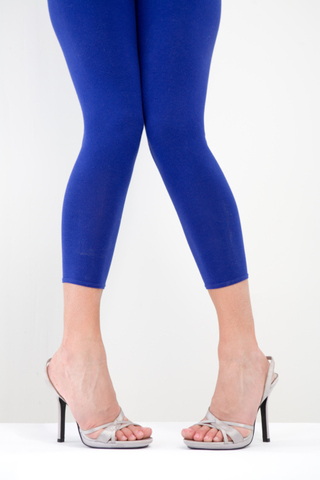 {Lifestyle} Leggings: Modest or Not? + POLL

A year or so ago I was teaching a young women lesson about modesty. One of the Mia Maids asked if leggings were considered modest. This was only a tad awkward because there was a girl in the class wearing leggings under her miniskirt. I said something like, “When wondering if something is modest, ask yourself if you would feel comfortable if the prophet walked in the room.” I know, totally a mom answer.

The truth is, I had thought about her question quite a bit even before she brought it up. Now, with school starting and fall fashion nearly here, I want to pose the question:

Here are my two cents. When I first saw someone wearing leggings, I laughed out loud as I had a flashback to the 80s. I remember seeing them advertised on a commercial and knowing they would be a fashion fail. Boy, was I wrong. Not only do we have leggings . . . we have jeggings.

For the few of you who don’t know what jeggings are, just picture leggings but they look like jeans—yes, gold thread, faux pockets, and all.

I have seen some leggings pulled off very tastefully. On the other hand, I have seen them pulled off, well, not so tastefully, to put it nicely. I feel very strongly that if you are going to wear leggings, you should wear something over them. They should not be used merely as pants. Those suckers are tight, and I don’t care what kind of shape you are in—they are too tight to wear in public without a layer of something over them.

I know what you are thinking: “But Ashley, they are SOOOOO comfortable!” Okay, I realize that. Yes, I own one pair of leggings. I wear them in the comforts of my own home and that is it. I really haven’t decided how I feel about them.

So, are leggings modest when you wear a shirt or dress that is a little too short with them? Are they modest when wearing a mini-skirt? I mean, if you weren’t wearing them you would be left with just a mini-skirt which isn’t modest . . . to me. What about jeggings, since that’s basically wearing leggings without anything else to help cover up? Like I said, you have to ask yourself if you would feel comfortable if the prophet walked in the room.

There you have it. Chime in if you have some awesome feedback, because I would love to hear it.

Ashley Bardsley is a contributing writer for LDS Living. The few things she enjoys more than traveling the world as an event coordinator include making and eating cupcakes, sleeping in and watching Saved by the Bell reruns with her husband.

Lifestyle Fashion Modesty Poll LifestyleFashion,Modesty,Poll,Lifestyle,Lifestyle
Comments and feedback can be sent to feedback@ldsliving.com