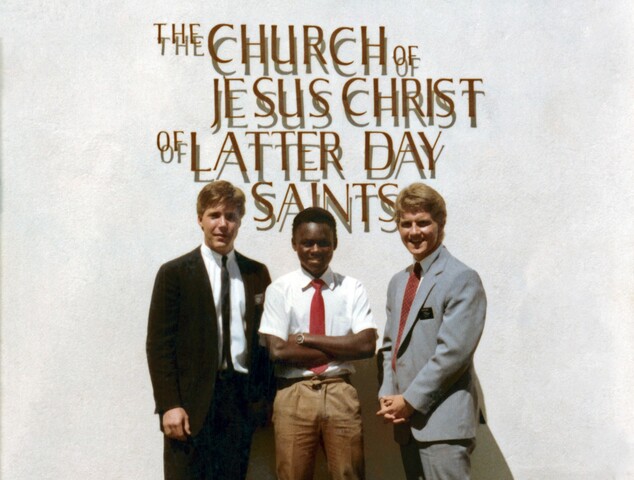 'Looking back, I wonder why I waited so long': How Elder Dube discovered his testimony of the Book of Mormon

At a time when the Nephites were in physical and spiritual danger, Alma went among them to preach the gospel. He was accompanied by Amulek, Zeezrom, three of Mosiah’s sons, and two of his own sons. Alma and his companions shared the gospel because “the preaching of the word had a great tendency to lead the people to do that which was just—yea, it had had more powerful effect upon the minds of the people than the sword, or anything else, which had happened unto them” (Alma 31:5).

In early 1983, at a pivotal time in my life, I began to truly partake of the “powerful effect” of the Lord’s word. I was 21 years old at the time. Looking back, I wonder why I waited so long.

► You may also like: Watch: Elder Dube’s conversion story through his narration, Malawi artist’s paintings

My Introduction to the Book of Mormon

Two years earlier, I ignored an opportunity to partake of the word of the Lord. I was working for a man named Leister Heath. As part of my job, I occasionally watched over the Heaths’ two boys: Leister Jr., age 9, and Bruce, age 7. One day while the boys and I were playing games in the yard, Leister Jr. said to me, “Eddie, do you know that my father is a branch president in our Church?”

I asked, “What is a branch president?” Leister Jr. explained that his father was the leader of their congregation in The Church of Jesus Christ of Latter-day Saints. I then told this 9-year-old boy that his father was wasting his time, because he would never go to heaven. My young friend looked at me with disappointment in his countenance and said nothing. I immediately realized I had made a mistake. You simply do not say things like that about your boss, especially to his son! Although I did not apologize, I wished I had not made that statement. I kept Leister Jr. and Bruce busy and entertained for the rest of the day, hoping they would forget what I had said. To my surprise and dismay, they ran to their father as soon as he came home from work. They said, “Daddy, Daddy, you know what? Eddie said you will never go to heaven!”

I thought I had lost my job.

Leister did not say anything right away. He waited until later, when I was clearing the dishes from the table after dinner. Then he calmly said, “Eddie, I believe you said I won’t go to heaven. Why?” After stammering and fumbling for words, I reminded him that he once told me that he had killed someone in a war. I said, “The Bible says, ‘Thou shalt not kill.’ And you killed.” In response to my accusation, Leister took time to help me understand that he had fought in the war to protect his family and friends. He also reminded me that the ancient Israelites in the Bible sometimes had to fight for similar reasons. “It’s different in those situations,” he said. “When you’re required to defend your country, it’s different.”

Leister must have sensed that I felt something, because he changed the subject and asked if I was going to any church.  I said I wasn’t but that I used to attend the Roman Catholic Church. Leister nodded, handed me a copy of the Book of Mormon, and asked me to read it. I took the book and placed it on a little table in my room. With the angel Moroni shining in gold on the hard cover, the book was an attractive addition to the place. I dusted it occasionally but never read it. Leister asked me periodically, “Are you reading that book?” I always lied and said I was. I was happy that I still had my job, but I had no interest in reading the Book of Mormon.

The Book on the Table

One Sunday morning, I got up, showered, dressed, and had breakfast. My friends were out of town, so I was compelled to break from our normal Sunday routine. As I thought about what to do, I looked down and saw the Book of Mormon on my table. Reluctantly, I picked up the book and walked outside. I went to a railroad line outside the township, sat down, and began reading.

At that time in my life, my reading comprehension in English was limited. Although I was interested in the Book of Mormon, I started dozing whenever I tried to read it. But I had a positive impression of Joseph Smith’s testimony at the beginning of the book, so I frequently reread that portion. And even though my understanding of the rest of the book was very limited, I felt good about what I was reading. 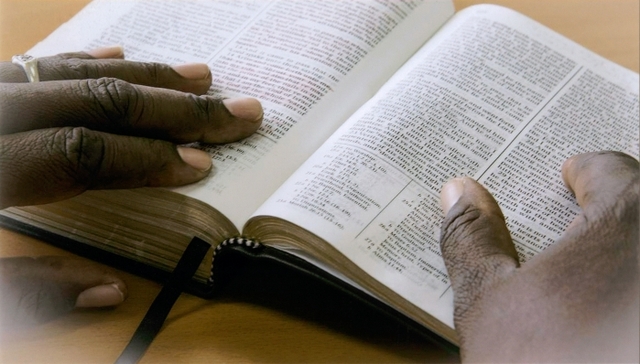 Over the next weeks and months, I felt a burning desire to continue reading, and so I did. As a result, I began to see things more clearly. The words in the Book of Mormon were soothing to me—and more than that, I felt their reality and truthfulness. It was as if I had experienced this overwhelming joy before. I sensed a familiar feeling from somewhere in a distant but real past.

What I didn’t realize at the time was that I was becoming converted to the restored gospel of the Lord Jesus Christ, through the power of His word.

One of the passages that touched me was the account of Jesus Christ appearing to the Nephites, recorded in 3 Nephi. The story resonated with me because I had learned of the Savior as a little boy—from family members and from my experiences in the Catholic Church. It also resonated with me because the Savior came down from heaven after the people experienced political upheaval, war, class distinctions, tribalism, and corruption (see 3 Nephi 1−7). When I read this account, my country had been suffering similar trials. Three years earlier, we had fought to obtain independence from Great Britain. We were still emerging from that lengthy and brutal war. The war had claimed thousands of lives and had left others maimed for life. Some of the dead and injured were people I knew.

Because of these personal experiences, I felt a connection with the Nephites. I marveled that the Savior visited them in their time of turmoil, and I felt the comfort and peace they must have felt when He invited them to thrust their hands into His side and feel the nail prints in His hands and feet. I still remember how I felt when I read this passage:

“Behold, I am Jesus Christ, whom the prophets testified shall come into the world. And behold, I am the light and the life of the world. . . . Arise and come forth unto me, that ye may thrust your hands into my side, and also that ye may feel the prints of the nails in my hands and in my feet, that ye may know that I am the God of Israel, and the God of the whole earth, and have been slain for the sins of the world” (3 Nephi 11:10−11, 14).

These words flowed into me with a warmth that enlightened my mind. I felt close to the Lord Jesus Christ. I felt as though I was among those He had retrieved from the human heap of despair. This knowledge and experience gave me a calm sense of worth.

I was discovering the simple good news of Jesus Christ.

► You may also like: Elder Dube shares how a nudge in a general conference talk inspired him to ask his wife to marry him

Now I began feeling that I should go to church. I knew where the Latter-day Saint meetinghouse was in my city, and I even knew a few of the people who worshipped there. By this time, Leister Heath and his family had moved out of the country, but Leister had introduced me to John Hove Newbold, a leader in the branch, and his wife, Jean. I worked for the Newbolds.

Despite my persistent feelings about the Church and my friendship with Church members, I didn’t immediately gather enough courage to attend a Sunday meeting. My personal fears and perceptions held me back.

For the next few Sundays, I stood a safe distance from the meetinghouse and watched those who entered the chapel. I felt inadequate. I worried that I would not fit in with them. All of them were White, and many of them drove vehicles. The men dressed in white shirts and ties, and some even wore dark suits. I reasoned that I probably needed to wait at least until I could purchase a white shirt and a tie. Somehow, my friends Jean and John noticed me and saw my timid interest. They asked if I wanted to learn more about the Church. When I told Jean about my experience with the Book of Mormon, she encouraged me to go to a Sunday meeting, even before I had a white shirt and tie. I gradually gathered courage to walk into that building.

On February 5, 1984, at the age of 21, I finally entered the Kwekwe chapel of The Church of Jesus Christ of Latter-day Saints. When I did so, I immediately wanted to walk right back out. I was uncomfortable, feeling that I was in a servant relationship to most of those in attendance. But I stayed and sat down on the back row.

My friend Leister had been replaced by a new branch president, a man named Mike Allen. As the meeting progressed, President Allen bore witness of the Savior Jesus Christ and the Book of Mormon. Then he invited people in the congregation to share their witnesses of the truth. Two members stood and expressed their faith in the Savior Jesus Christ and testified of the truthfulness of the Book of Mormon. As I listened, I began to feel that I could connect with these people. Their words brought comfort and peace to my mind.

Suddenly I found myself on my feet. Yes, I was the fourth person to speak in the meeting. I said, “I, too, am reading the Book of Mormon. I like it, and I love Jesus Christ. Thank you.” Then I quickly sat down.

After the meeting, a few members approached me and said I was welcome in the Church. Sister Newbold told me about Sunday School, and I attended that class. Then a brother in the branch invited me to go to priesthood meeting. Another member told me of a class on Tuesday night that I could attend to learn more about the gospel. I felt overwhelmed by the love of these Saints.

For a while, I would continue to struggle with doubts about whether I belonged at church. But I had learned something that would sustain me in those times of doubt. I learned that we can always find comfort in the Lord’s word. And we can receive more than comfort. We can receive strength—strength to do things we have never imagined we could do. 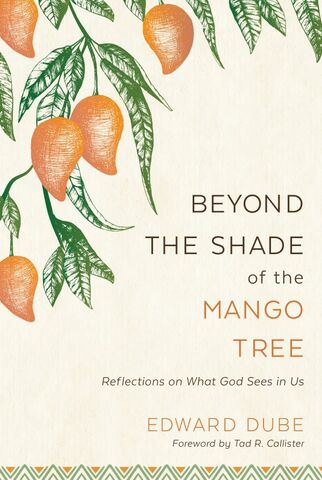 Through Elder Edward Dube’s own personal experiences, along with teachings of latter-day prophets and the scriptures, Beyond the Shade of the Mango Tree: Reflections on What God Sees in Us teaches that we can come to see ourselves as the Lord sees us—His beloved children, with the potential to become like Him. Available at Deseret Book stores and on deseretbook.com.