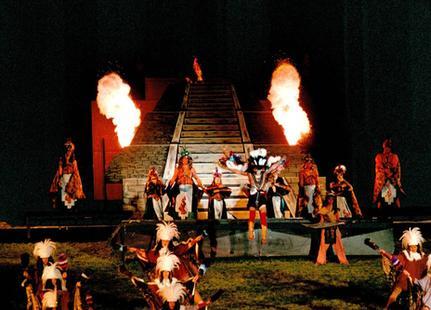 For several nights each summer, the picturesque hillside below the Manti Utah Temple becomes the site of one of the largest outdoor productions in the world.

The event draws an average of 100,000 people each season. The production comes with a cast of more than 950 performers, including 650 under age 18. Approximately 400 people set up (and later take down) about 14,000 metal folding chairs. Another several hundred people — the directing crew, wardrobe and make-up artists, ushers and security personnel, the stage and production crew, as well as those who serve dinner to the cast — volunteer in various ways. The Sanpete County Search and Rescue and the Manti-Ephraim Emergency Medical Technicians are also on hand to assist when needed. Lastly, dozens of Primary children and adult leaders from local wards of The Church of Jesus Christ of Latter-day Saints walk the temple grounds the morning after performances to clean up trash.