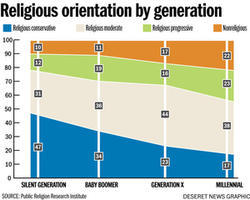 More than 2,000 people converged on rural North Carolina earlier this month for the third annual Wild Goose Festival, a gathering featuring music, art and speeches on religion and social issues — all with a liberal twist.

The festivalgoers fit the description of what some call "religious progressives," a label that riffs on the idea of "religious conservatives" to describe those who exhibit both faith and left-of-center politics. According to research released recently by two liberal-leaning research groups, Public Religion Research Institute and the Brookings Institution, this group may have the potential to change the dynamics of religion and politics in America.

But the diverse religious and political views of those involved in the Wild Goose event also reflect a big reason the term "religious progressive" may amount only to a label and not a movement that rises to the political prowess of the so-called religious right.