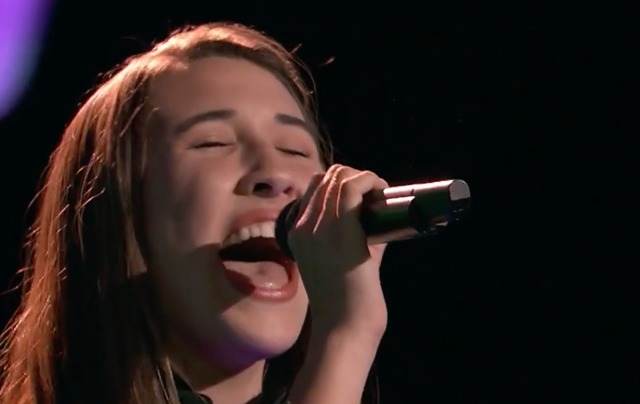 Stepping onto The Voice stage and staring at the back of four red chairs, Hanna Eyre smiled as the lights faded and the music started.

This was it. This was her blind audition. The outcome of her a little more than a minute-and-a-half vocal performance would help shape her music career, which began long before she stepped into the national spotlight.

When Hanna Eyre was 5 years old, her mother asked her if she wanted to play the piano.

"And I was like, 'Yes! Let's do this,'" the LDS 15-year-old said on NBC's The Voice, wearing a Young Women medallion during her interview.

From there, Hanna fine-tuned a love of music and about 10 years later, she still plays the piano. On The Voice, her mother even admits Hanna surpassed her in skill, taking on 12 to 13 piano students of her own. But Hanna says her real passion is singing and songwriting.

Hanna's family says they are supportive of her music career. In fact, it was Hanna's father who signed her up for the popular TV show.

"I was ecstatic and super surprised," Hanna said on the show, remembering how she felt when she found out her dad and signed her up.

The 15-year-old moved on through the audition process until she landed a blind audition—an on-air audition where four celebrity judges would determine whether or not she continued on the show.

"If one of the chairs turns around, I'm going to be trying not to scream," Hanna said before her audition.

With all four celebrities seated on bright red chairs, their backs turned to Hanna unless they enjoyed her performance enough to push a big red button to turn their chairs to face her, Hanna began her performance of "Blank Space" by Taylor Swift.

Within a few moments of her performance, it was clear the judges were impressed as Hanna earned a "Wow, good voice" from judge Alicia Keys. And at just past the 30-second mark in her performance, judge Adam Levine slapped his button and turned his chair around. A few moments later, show judge Blake Shelton also hit his button, followed shortly by judge Gwen Stefani.

By the time Hanna finished, three judges out of four had turned their chairs to face her, a sure sign she would move on in the competition.

And while she didn't scream when the first judge turned to face her, she couldn't help smiling.

"Hanna, sweet Hanna, you are so cute. The second I turned around, you started smiling and you, kind of, maybe, a little bit, forgot about the fact that you're still singing," Levine noted.

"Every time you smile, the whole room lights up," Shelton remarked. "You have this smile, that, it literally, listen to people, they literally giggle when you smile. You don't have to do anything, you just have to stand there and do that and I'm buying your record."

Stefani and Keys also praised Hanna for her talent, with Stefani noting Hanna was "exactly what she was looking for."

Though three judges vied for Hanna to be on their "team" in the competition, Hanna chose Levine, who said he was going to "claw and fight" to have her on his team.

"For someone who's 15 years old to be that good, she's gifted," Levine said.