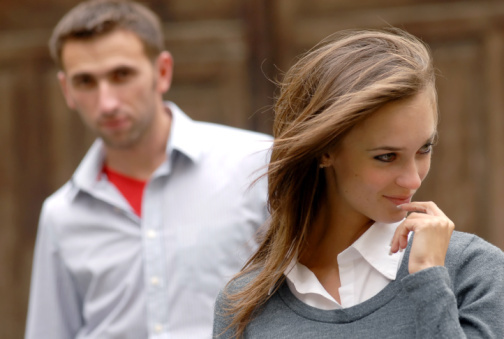 I remember watching Disney’s Snow White and the Seven Dwarves and asking my mother what Grumpy meant when he said, “And all females is poison! They’re full of wicked wiles!”

Naturally, I decided to extend this observation to the dating world. What wily tricks do girls use to get a boy’s attention? I always thought that if a guy could catch me wearing a ballgown and singing at my window, he’d be hooked. Then I realized, as a comparatively naive and non-wily dater, wouldn’t it be helpful to get tips from my fellow females and test them for the benefit of all women?

Game Plan: After contacting my most experienced friends and family, I compiled a list of the top tips I wanted to try out. As I put the list together, I kept thinking, Can it really be this easy? Are these really the time-honored secrets to dating?


1.    Be straightforward; guys like girls who ask them out.
2.    Accidentally bump into a guy and then play the “shy” act.
3.    Tell someone to tell a guy you’re interested in him. Wait for the guy to make the next move.
4.    Touch the guy’s elbow.
5.    Facebook stalk and message a guy you’ve just met.
6.    The glance: make eye contact with a guy until the peak moment, then smile and look away.
7.    Compliment the guy and then keep asking questions about him.
8.    Make sure you interact with the guy a lot. Repetition is the key to getting him to remember to fall in love with you!


To ensure that my results were not skewed, I enlisted the help of some of my single coworkers here at LDS Living, and so began the great experiment. (Note: names of the poor guys who were afflicted by our dating awkwardness have been changed.)

1. Be straightforward; guys like girls who ask them out.
Emily, Intern


I’ve always been the sort of girl who believes guys should ask girls out, not the other way around. If I were being completely honest, I’d say I believe that because it scares the living daylights out of me to ask someone out. Nevertheless, in the interest of providing useful research to humanity, I decided to conquer my fears and ask a guy out.

I’d wittily bantered with this guy (we’ll call him Jarrod) for a while, but he hadn’t made a move, and I was getting impatient. One day, when we were working together and verbally sparring, our boss came up and said, “Jarrod, ask her out.” We both shrugged and laughed, and then I did it. I said, “Jarrod, ask me out.” He laughed, but I repeated in a more serious tone, “Ask me out.” And guess what girls—he asked me out. We went and ate expensive, delicious hamburgers, and then we saw a movie. Aside from the fact that our conversation was a little slow and we both kept our hands tight to our sides during the movie, it was a pleasant date. Did he ask me out for a second date? No. But did he ask me out for a first date after I asked him out? Yes.

2. Accidentally bump into a guy and then play the “shy” act.
Ruthann, Circulation Manager

At the end of a stake musical fireside, I saw an attractive guy who looked like a quality person and also happened to be wearing a terrific tie. My roommate suggested we could walk by him on our way to meet our friends and she could gently push me so I would end up “accidently” bumping into him.  I could apologize, act shy, and then make a casual comment which would hopefully start a conversation.

Unfortunately, her “gentle” push sent me hurtling into him, resembling what looked like a football tackle rather than a gentle bump. As he was trying to recover from the unexpected hit, a look of surprise and confusion spread across his face (can’t really miss someone’s facial expression when you are about three inches away from it). I scrambled to recover and stand on my own two feet while keeping the red shade of embarrassment on my face from growing any darker. I was about to turn and run away when I realized I had agreed to make a least one comment. I mumbled something like “nice tie” before sprinting off, leaving the guy standing there with the look of utter confusion.

Maybe this could work for some people, but I would strongly encourage you to be aware of others’ strength and your own ability to stay focused.

3. Tell someone to tell a guy you’re interested in him and wait for the guy to make the next move.
Emily, Intern

I didn’t want to be the girl passing notes to friends and asking them if so-and-so liked me. But after really liking a guy (we’ll call him Chris) for awhile and feeling that he liked me, I decided it was time to take action (in a less direct way than asking him out). So, I talked our mutual friend, who we’ll call Rhetta, into telling Chris that I wouldn’t say no if he asked me out. Two days later, she told me the deed was done, and the ball was effectively placed in his court.

After two weeks went by and I heard nothing from him, I prepared to move on, but suddenly it happened: “Hey, what are you doing this weekend?” We went out on our friend-inspired date, and then a couple more after that. Moral of the story? If he’s even a little bit interested in you, getting a friend to tell him about your mutual attraction is a surefire way of getting a date.

This is one of those Mormon college traditions of almost mythical proportions: if you touch a guy’s elbow, he’ll magically fall for you. Just like that. My sophomore year of college, my roommate and I decided to try it out. We debuted our experiment at a battle of the bands event and casually wandered the room wacking guys’ elbows as we passed by. We remained single.


Here’s what I concluded: most girls never try this one out because, well, touching a guy’s elbow without coming across as really awkward is nigh impossible. You’re going much more into his personal bubble than normal. And if you’re already close enough to the guy to be able to do so without being awkward, you’re already close, so this just becomes extra fodder: you’re touching them, and not only are you touching them, but you’re doing so more intimately than would be normal.

Make sure you read Part 2 to hear stories of Facebook stalking, eye games, and more!