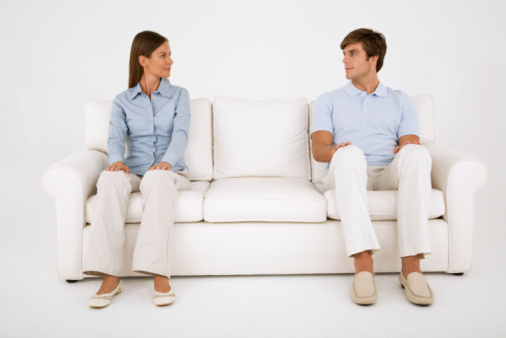 The other day I had The Talk with a girl. The Talk, for those of you who are either unfamiliar with my specific lingo or have managed to warp into an alternate universe where relationships always glide along intuitively without any sort of verbal guidance, is a checkpoint in which two parties in a relationship assess their progress up to that point, compare feelings, and make decisions regarding the immediate future in terms of the relationship as a whole. Or to use fewer words: It’s where the girl holds your heart hostage and can either give it back unharmed or toss it into a meat grinder.

To be fair, that grisly metaphor assumes the guy is the one interested, while the girl is indifferent. I’ve had instances where the opposite is true. I’m sure you have as well. But the essence of The Talk is that it’s the point where two roads diverge—one to a relationship that is sure to live on for at least another day, and one to a place where the word “friend” becomes almost like a curse word.

Let me walk you through the stages of The Talk.

Stage 1: Preamble
During this stage, one or more of the parties will be anticipating the conversation and will be making clandestine plans to introduce the topic. The other party may be completely unaware of the oncoming change in the wind or may sense the ominous rumblings of an approaching storm. There may be a slight awkwardness in the air, like static electricity. Nearby animals may instinctively take shelter.

Stage 2: Introduction
Inevitably, it will fall upon one of the two participants to bring up the subject. It might go like this: “Ryan, I think we need to talk.” When she says this, you can be reasonably confident she doesn’t feel a sudden need to discuss her favorite pizza toppings. If it’s the guy who takes the initiative in this case, he might say, “So … I like you. How do you feel about all this?” To illustrate what I mean by “all this,” I may wave my hand at our surroundings in a vague but ostensibly helpful fashion, as though everything around us were somehow an inextricable part of the budding relationship.

Stage 3: Response
Let’s assume for a moment you are a man and the one who introduced the topic, and that you would very much like for the relationship to move in a positive direction. It’s important during this stage to remember to breathe, as too often attention may be diverted from your basic needs in favor of anticipation of the response. A pause is usually okay. She may be considering her feelings, or she may be trying to phrase her reply in precisely the right manner. She may also be searching for a sharp object with which to maim you while she makes her escape. The decider—in this case, the girl—might say, “Yeah. Let’s keep going and see where things go.” She might also say, “Well, I really like you as a friend,” as though “I really like you” is supposed to compensate for the use of the dreaded “as a friend.” If her answer begins with the latter response, it’s probably best to start preparing for a dignified acceptance of the bad news.

Stage 4: Aftermath
One of two outcomes is now a reality. In the first outcome, the two of you are happily starting out on the beginning of a magical journey together, full of bliss and possibly singing woodland creatures. In the alternative outcome, one of you is going to go home, stuff him- or herself with disturbing amounts of high-calorie food, and watch either the six-VHS set of Pride and Prejudice or the extended editions of The Lord of the Rings.

No matter the outcome, however, it’s probably for the best that the two of you exercised crucial communication skills. Whatever the end result of your participation in The Talk, you are probably a slightly better person for it, whether or not you realize it. The Talk is a rite of passage we all must undergo—with the assurance that someday The Talks will end when we find The One. We can only hope we find The One before we exhaust our supply of Jane Austen movies or blockbuster battle epics.