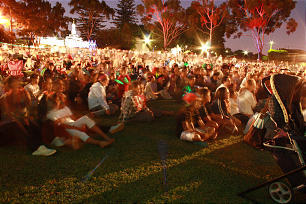 This time of year means cold and snow in much of the world, but not in Australia, where summer prevails from December through February. Mormon missionaries in the Australia Perth Mission took advantage of the balmy temperatures to put on a "Summer Wonderland" event Dec. 10 that drew some 1,500 people, yielded some 200 missionary referrals and has already led to at least one baptism and several people hearing the missionary lessons.

In an e-mail to his family in Utah, Elder James Crawley said a committee of six missionaries planned and organized the event, which included a Cook Islands group, a Samoan fire dance, a Hawaiian group, a New Zealand kapa haka group (the traditional performance art of the Maori people) and performances by groups of sister missionaries and elders.

The program was staged adjacent to the Perth Australia Temple and a Church meetinghouse, giving visitors a chance to see these edifices.