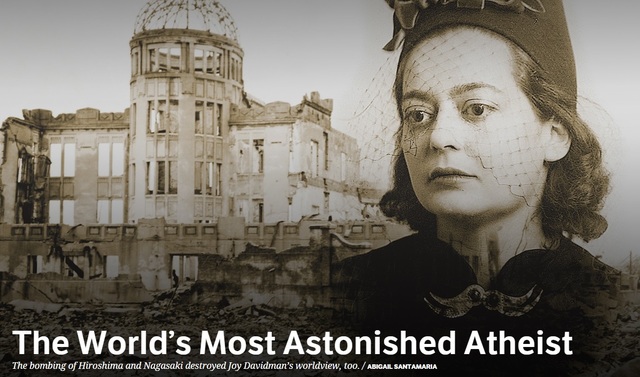 MR says: From the bombing of Hiroshima and Nagasaki to struggles with her home life, Joy Davidman's journey took her through some earth-shattering events that brought with them a new view of heaven.

When the atomic bombs fell in August of 1945, forcing the fact of mortality, Joy suddenly realized that civilization could be instantly obliterated. She was bringing a second child into a world where, she wrote in one poem, “ashes that were babies / blew among the bamboo trees.” Science might not be society’s salvation, as she had long believed; instead, it might be the world’s damnation. . . .

During the months that followed, atomic dread, postpartum depression, and an unstable husband left Joy physically and mentally exhausted. One weekday in the spring of 1946, the phone rang. It was Bill, calling from his Manhattan office in a panic. “[I’m] having a nervous breakdown,” he told her. His mind was going. He felt paralyzed. He couldn’t stay where he was and he couldn’t bring himself to come home. Then he hung up.

Read the rest of this story at christianitytoday.com