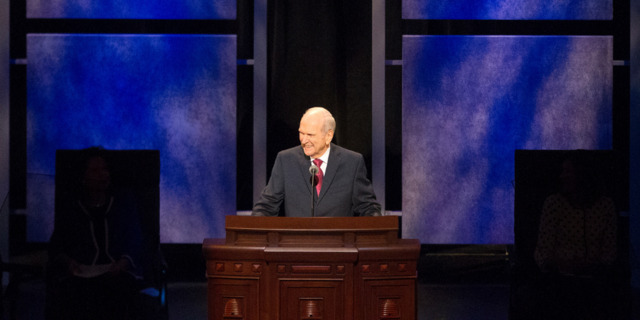 ‘The most important thing taking place on earth today’: Why the gathering of Israel matters

A worldwide devotional for youth took place just three months after President Nelson had been sustained and set apart as the seventeenth President of The Church of Jesus Christ of Latter-day Saints. Although it was billed for the youth of the Church, there was a lot of excitement about the broadcast, and I wanted to hear what President Nelson had to say.

After some preliminary welcoming remarks, he challenged the youth to do “the necessary spiritual work” that would bring personal revelation. But what came next took me aback a little. “Now, we would like to talk with you about the greatest challenge, the greatest cause, and the greatest work on earth. And we want to invite you to be part of it” (“Hope of Israel,” worldwide broadcast for youth, June 3, 2018). President Nelson spoke to the theme of the gathering, and what he said took me completely by surprise.

I remember thinking, “He’s talking to the youth of the Church about the gathering of Israel? That’s a pretty mature topic for adults, let alone for youth as young as twelve and thirteen.” I pushed those thoughts aside and listened intently as he went on and asked them if they would like to be part of the work of the gathering. As he concluded his remarks, he emphasized yet again the importance of his topic: “My dear extraordinary youth, you were sent to earth at this precise time, the most crucial time in the history of the world, to help gather Israel. There is nothing happening on this earth right now that is more important than that. There is nothing of greater consequence. Absolutely nothing.”

But then came a teaching moment as I asked myself again, “More important than the Atonement?” Of course not—not in the eternal scope of things. But President Nelson didn’t say that. He said that the gathering of Israel was the most important thing happening on earth right now. And why is it more important than anything else happening? Because only as people gather to the covenant does the Atonement become a reality in their lives. More important than missionary work? Of course. The whole purpose of missionary work is to invite people to come into the covenant. And that’s true on both sides of the veil. When we consider it, every doctrine, every principle, every part of the organization of the Church, every blessing of the gospel won’t do the people of the world one bit of good until they are gathered to the Church where they will find those doctrines, where they will have access to those ordinances, and where they can become the Lord’s true covenant people.

► You may also like: Follow President Nelson’s invitation to study covenant Israel with this free, daily study guide

That night was a marvelous teaching moment for me. I had learned something profound that I had not considered before. The gathering of Israel is of prime importance in our task to prepare the Church and the world for the Second Coming of Jesus Christ precisely because that is how we get people into the covenant so they can enjoy all the blessings of the gospel.

Bringing the Children of Abraham Back to the Fold

Russell M. Nelson is not the only prophet who has suggested that the gathering of Israel is one of the greatest things to ever happen. We earlier cited the prophet Jeremiah, who said that the day would come when we would no longer talk about the day when Moses brought Israel out of Egypt, but of the Lord bringing back the ten tribes from the north (see Jeremiah 16:14–15). He then described how it was possible that the return of Israel could be so important:

That last verse is a wonderful description of true Israel, covenant Israel.

Ezekiel, a contemporary of Jeremiah who was taken captive to Babylon, also described the gathering in our time:

While the resurrected Lord was visiting the Nephites in America, He too spoke of the gathering as the time when a renewed Israel, a covenant people, would return, including the descendants of Father Lehi:

I will remember the covenant which I have made with my people; and I have covenanted with them that I would gather them together in mine own due time, that I would give unto them again the land of their fathers for their inheritance, which is the land of Jerusalem, which is the promised land unto them forever, saith the Father. And it shall come to pass that the time cometh, when the fulness of my gospel shall be preached unto them; and they shall believe in me, that I am Jesus Christ, the Son of God, and shall pray unto the Father in my name. . . . Verily I say unto you, I give unto you a sign, that ye may know the time when these things shall be about to take place—that I shall gather in, from their long dispersion, my people, O house of Israel, and shall establish again among them my Zion (3 Nephi 20:29–31; 21:1).

Four months after President and Sister Nelson spoke to the youth of the Church, President Nelson again spoke of the gathering of Israel, this time in the women’s session of general conference:

This gathering is the greatest challenge, the greatest cause, and the greatest work on earth today! It is a cause that desperately needs women, because women shape the future. So tonight I’m extending a prophetic plea to you, the women of the Church, to shape the future by helping to gather scattered Israel (Nelson, “Sisters’ Participation in the Gathering of Israel,” Ensign, November 2018).

Those references make it clear that one of the primary reasons The Church of Jesus Christ of Latter-day Saints was organized in this dispensation was to provide the doctrines, the priesthood keys, the covenants, and the ordinances required to gather Israel back into the covenant fold. We often speak of eternal families as one of God’s greatest gifts to us. But isn’t that what the gathering of Israel is all about? Bringing individuals into the covenant so they can become part of their own eternal family? Is there anything of greater significance than that?

Originally published in 1971, The Coming of the Lord, by Gerald N. Lund, became an instant bestseller and has remained continuously in print for nearly fifty years. Now this trusted resource has been fully updated and rewritten to reflect the latest prophetic teachings and a grow­ing sense of urgency as the Lord hastens His work. Find it at DeseretBook.com.