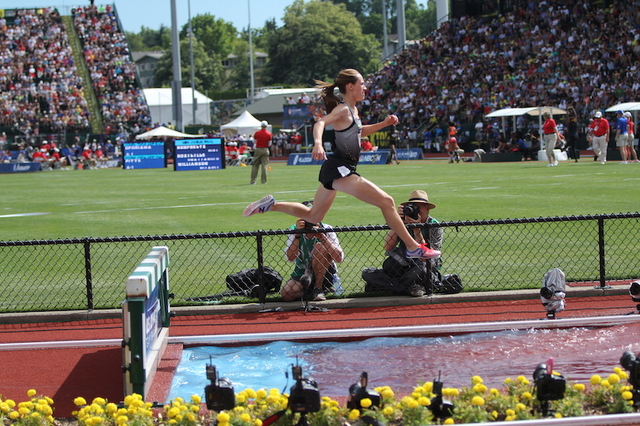 "This Is Your Gift": Mother of 9 Shares Her Journey to the Atlanta Olympic Marathon Trials

Rena Elmer is no stranger to trials—those of the painful, gut-wrenching variety and also those of Olympic size.

The marathon tryouts for the 2020 US Olympic Team Trials in Atlanta are just days away. At 5 feet, 4 inches and 117 pounds, Elmer is the picture of lean muscle and endurance. With an eager smile, she nearly bounces off her seat where she sat cross-legged on the couch and recounts what brought her to this point. Elmer is age 37 and the mother of nine biological and stepkids. Those statistics alone make her the poster child of anything-can-happen Olympic dreams. But the athlete is so much more than numbers.

No stranger to the Olympic Trials, Elmer competed on the national stage in the 3000-meter steeplechase in both 2008 and 2012. After narrowly falling short of qualifying, she tried again in 2016, just after having her fourth child, Kristen. This time, she qualified, placing 10th overall and beating her record by 12 seconds. “I always want to set a [personal record] after every kid,” she says.

She talks of the 26.22 miles she’ll be running in the Atlanta trials—her second marathon ever— as if it’s no big deal. And for Elmer, it really isn’t. Running is in her nature. 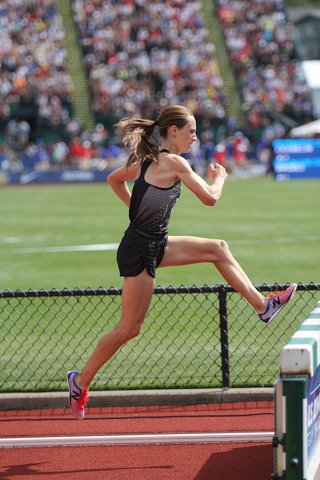 Case in point. In November 2019, Elmer competed in her first marathon, the Indianapolis Monumental Marathon. Finishing at 2:40:21—five minutes faster than her goal—Elmer qualified for the Olympic Trials.

“That was way faster than I was training for,” she says fittingly, as it was another personal record for her only 10 months after having her fifth child, Kimber.

But why not compete in the steeplechase again? That is her forte, after all. It’s the event that earned her third place in the 2005 NCAA Outdoor Championships and was the reason she was named an All-American distance runner for Brigham Young University.

The answer was simple. “The Trials are on a Sunday. I don’t run on Sunday,” she states matter-of-factly.

And there’s where the heart of the matter lies. One conversation with Elmer and there is no doubt she is a champion of commitment and accountability. She brings the same dedication to her faith as she does to running. And for her, that is the key to her success.

“I made a commitment to never run on Sunday,” she says. “There was a time I ran on Sunday, but it just didn’t feel right. That’s when I made the commitment to not run on Sunday ever again. This feeling just came to me right then that said, ‘You will be blessed far beyond what you can imagine in your running if you keep the Sabbath day.’”

Elmer has seen that promise fulfilled in her life time and time again.

“I really feel like the Lord has blessed me—not just to run faster, but blessed me to have people in my life when I needed them,” she says, referring to family and friends that helped with her children when she trains.

If you rewind to 2015, those loved ones were especially needed when Elmer experienced a particularly dark time of her life when her 12-year marriage ended in divorce. Suddenly a single mother of four children, Elmer also credits daily scripture study, her relationship with Jesus Christ, and running for getting her through those tough years.

“My first marriage was really challenging. We were all going through a lot of trauma during those years,’ she says. ‘I was able to persevere [by] having a relationship with the Savior. The [adversity] brought me closer to the Savior, and I owe a lot of that to just studying the scriptures every day and having that relationship with the Lord. When you do that, you really see the Atonement work in your life, and that’s been the biggest blessing for all of us.”

Following the divorce, running was a constant that helped her find purpose, she continues. “Through all [of] that, my running really was a gift. I would have been so depressed and distraught that my whole world just got flipped upside down. The running brought out a confidence in me and helped me to get through those challenges and to be a better person.”

As Elmer worked to improve herself and adjust to life as a single mom, she soon met a man named Will, who had four children himself from a previous marriage. The two met online and started a long-distance relationship between Utah and Texas.

“He tricked me into thinking he was an athlete,” jokes Rena. “He will run with me, but doesn’t like the long stuff.”

The couple was married March 2, 2017, their families making a combined total of eight children. This number would later grow to nine kids ages 11 years old and under when Kimber was born in 2018. But Elmer is sure to point out that there are no “her kids” or “his kids” in their blended family—“just our kids.” 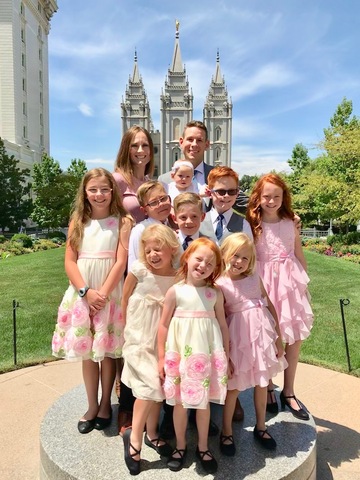 Following Kimber’s birth, there were some setbacks to Elmer’s running, including a two-month hiatus from training when she broke her big toe on the sidewalk outside her home. When she recovered and wanted to pick up where she left off, she decided to do some soul-searching first.

“I was having all this conflict and feeling torn because, well, we have a lot of kids and a lot to manage and take care of. I felt like by running I was being selfish. Maybe it was time to move on and kind of grow up and not put so much focus on running.

“So I started praying and asking Heavenly Father if I should do this. ‘Is this going to impact my family for negative?’ The Spirit instantly told me, ‘This is your gift. Use it to build the kingdom of God.’ All of my thoughts of being selfish and greedy from the running were gone.”

Elmer says after that experience, she witnessed miracles and tender mercies. Through her running, unique ministering experiences were made possible and she was able to give away multiple copies of the Book of Mormon. 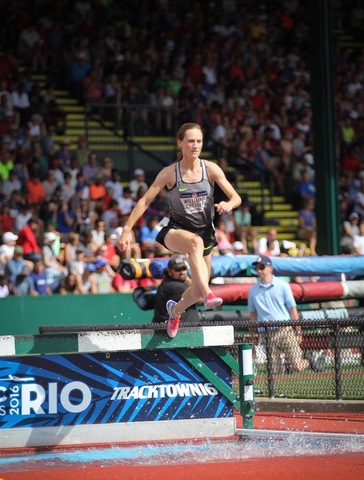 “Running is the gift God has given me. The Lord has worked through me in my running. This is where He wants me,” she attests. Elmer also points to the scriptures as a source of inspiration and strength, particularly Isaiah 40:31:

“But they that wait upon the Lord shall renew their strength; they shall mount up with wings as eagles; they shall run, and not be weary; and they shall walk, and not faint.”

“Trying my best to be obedient through my whole life has allowed me to rise above on eagle’s wings,” Elmer says. “I stayed faithful and rose above those challenges and never doubted the Lord. It wasn’t about what is happening right now, but what this is going to lead to in the future. He gave me that perspective.”

She recalls President Russell M. Nelson’s talk “The Book of Mormon: What Would Your Life Be Like without It?” from the October 2017 general conference. In it, the prophet speaks of the power of the Book of Mormon and how it can be a guide in one’s life.

“That is absolutely true,” says Elmer. “Studying the scriptures and Book of Mormon have absolutely been the number one factor in helping me get through hard things.” 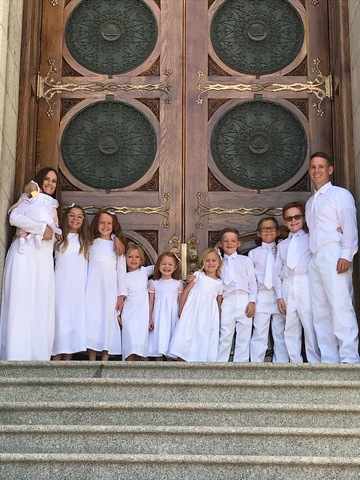 While there are accolades and achievements galore in Elmer’s running career, she says the true highlight of her life was going to the Salt Lake Temple last summer with her husband, Will, and their children to be sealed as a family for all eternity.

Family is everything to Elmer. Her bio on the Atlanta Olympic Trials website includes her favorite quote by President David O. McKay:

"No success in life can compensate for failure in the home."

And that’s the thing. Running is a part of Elmer, but it isn’t who she is. She’s a wife, mother, and member of The Church of Jesus Christ of Latter-day Saints. There are no sponsorships or shoe deals or coaches, although, she does claim to have the best training partners—nine kids who often ride their bikes alongside her on the sidewalks of their home in Flower Mound, Texas.

“It’s about keeping the balance in life. It’s about serving the Lord and serving your family,” she says. “My [BYU track] coach always kept a quote on his desk that said, ‘What would you attempt to do if you knew you could not fail?’ That’s my personality. Always going. To see what I can do next. Going to the trials to me is going to the Olympics. For me, this is my Olympics.”

Running OlympicsRunning,Olympics,
Comments and feedback can be sent to feedback@ldsliving.com