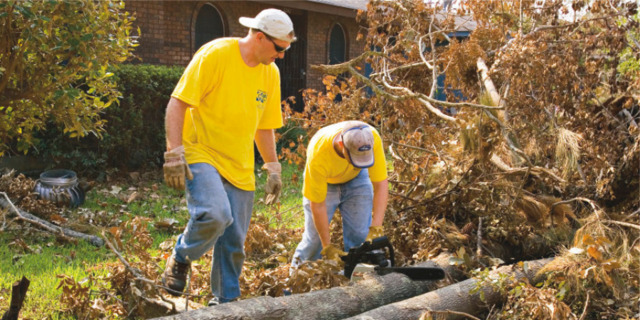 ‘Those people in yellow shirts will make me smile for a very long time’: The story behind this viral TikTok

It’s a video that took social media by storm after a storm. Following destruction in Lake Charles, Louisiana, after Hurricane Laura, Tara Parks took to TikTok to share her experience after receiving service from Helping Hands, a Church program that provides community service and disaster relief to those in need.

“Mormons are the best people on the planet,” Parks said in the video, which she also shared on Facebook. She then described how a tree fell on her house during Hurricane Laura. She expected a few people to show up to help her remove the tree, but to her surprise 30 volunteers from The Church of Jesus Christ of Latter-day Saints came to her aid.

“They are efficient—machines! I don’t know what they’re eating or maybe God has blessed them with superhuman ability (gives a whole new meaning to ‘blessed and highly favored’),” Parks said in the video. “It was 100 degrees outside, and I swear not one time did I ever see that permanent smile come off their face.”

Note: The video contains an instance of adult language. You can also watch the video on Facebook here.

I serve as the Coordinating Council Communications Director in Louisiana and was asked to get in contact with Parks to get to know her story better. I was immediately drawn to her as I watched her clever, warm, open style, announcing to her followers she had been the recipient of a wonderful gift following destruction in Lake Charles, Louisiana, due to Hurricane Laura. Her charming banter invites her 70,000 followers to stay tuned for more inspiration.

Parks became interested in TikTok when her sons started using it. She decided to follow along. Next, she started posting her own moments of insight and opinion. Her ups and downs are relatable as she tries to share her wisdom with others as they go through their own challenges and provides a few laughs along the way.

“I think it is important to face who you are every once in a while,” Parks explained. When she looks back on her difficulties, she is grateful for them.

“Others may curse the challenges, but I realize that when you put all your experiences together, you get a beautiful work of art. You can choose to see it that way.”

Though Parks, who works as an art teacher, isn’t involved in organized religion, she respects those that are involved in it. She was brought up in a house of faith and has turned to God in difficult times.

“About a year ago, I was really struggling,” Parks described. “I decided to talk to God. It had been a long time. I wondered if He was really there, and I told him that. I also told him it would be a great time to let me see His hand in my life.”

Lately, she has had experiences that have made her take notice that she is not alone.

“When those yellow shirts came marching in to remove the tree from my house, smiling the whole time, I saw His hand again,” Parks said. “I always struggled with watching people who profess with their mouths but do not follow through with their hands and feet. . . . I hope my light-hearted posts are not only entertaining but serve to remind people of the good going on around us. I am trying to remember to see the good, and the memory of those people in yellow shirts will make me smile for a very long time.”

Viral Helping HandsViral,Helping Hands,
Comments and feedback can be sent to feedback@ldsliving.com