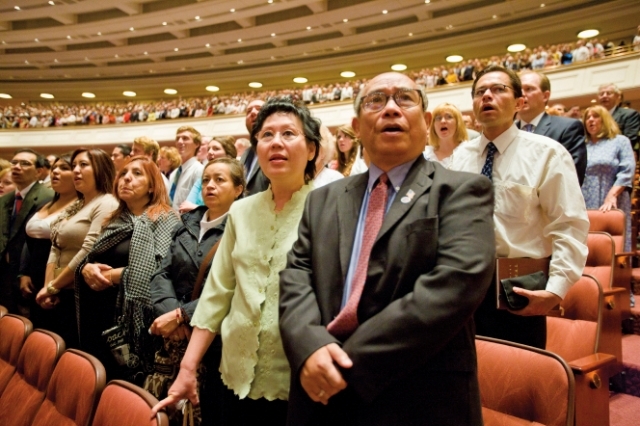 "Vox": Most Churches Are Losing Members Fast — but Not the Latter-day Saints. Here’s Why.

In an era marked by unprecedented religious decline, a new Vox article asserts that The Church of Jesus Christ of Latter-day Saints appears to be holding its own.

The reason for the success? The "unrelenting focus on the family," writes author Daniel Cox.

While other theologically conservative and liberal churches alike have seen an increase in disaffected members leaving their ranks, the Church has maintained its membership:

"One-quarter of Americans are religiously unaffiliated today, a roughly fourfold increase from a couple of decades earlier. Christian denominations around the country are contending with massive defections. White Christian groups have experienced the most dramatic losses over the past decade. Today, white evangelical Protestants account for 15 percent of the adult population, down from nearly one-quarter a decade earlier. By contrast, Mormons have held steady at roughly 2 percent of the US population for the past several years. And perhaps as importantly, Mormons are far younger than members of white Christian traditions."

The biggest reason, says Cox, is the Church's continued emphasis on traditional family life and roles.

"Few religious communities have made the development and maintenance of traditional family structures such a central priority," he said.

This emphasis on marriage and family is nothing new to Latter-day Saints. But few religious communities have made such an emphasis. Latter-day Saints are also more likely to marry within their faith than members of most other religions. This unified approach to faith shows in the religiosity of their children, said Cox:

"The structure of Mormon families is hugely advantageous when it comes to passing along religious identity. Family life has always been a critical source of religious vitality. It is the crucible within which religious identity is formed, rituals are learned and practiced, and beliefs take shape. As societal attitudes about sexual norms drift further from traditional religious norms, and the stigma of non-belief wanes, formative religious experiences are becoming even more important. A generation ago, most Americans who shed their childhood religious attachments did so during their college and post-college years. Today, four in five young adults who report having left their childhood religion say the turning point occurred before they reached age 18, most likely when they were still sleeping under their parents’ roof."

Another reason for The Church of Jesus Christ's success is its willingness to alter its approach on tough issues.

Among younger members of the Church, there has been what Cox calls "a modest decline"— the Pew Research Center’s 2014 Religious Landscape Survey found that 64 percent of those raised in Latter-day Saint households still identify as Latter-day Saints as adult, down from 70 percent in 2007. Comparatively, says Cox, this rate is still better than that of most other Christian denominations.

Cox attributes this to the willingness of the Church's leaders to alter its approach on tough issues. While The Church of Jesus Christ of Latter-day Saints maintains its conservative theological stance, it has adopted more inclusive language when discussing LGBTQ members and is "offering a kinder and gentler approach on hot-button social issues" like LGBTQ rights.

"This shift stands in stark contrast to what is unfolding in [other religions]," writes Cox.

Overall, Cox says, the recent research and statistics provide a reason to think that Latter-day Saints may be successful in the fight against the general religious decline in society:

"The reasons Americans leave religion are varied, often complex, and incredibly personal. As a result, there is no single tactic that will ensure the vitality of religious congregations in the US. But the Mormon experience is instructive. At a time when the American family is undergoing seismic shifts in structure and function, the church appears to be leaning into its emphasis on traditional family life and roles. However, the church appears much more willing to change its approach and rhetoric, if not theology, when it comes to LGBTQ members."

Read the rest of this story at www.vox.com