"You Will Never Give Birth": The Unexpectedly Hopeful Revelation One Woman Received in the Temple

Hope and infertility. Two words that don’t always go together in this world. But, for one couple, hope came at the end of a long struggle with the dark cloud of infertility. And for them, it brought with it peace and a strengthened testimony of Jesus Christ and the hope He gives to all who seek it. It was the kind of hope that gave Sally and Ryan Paskins new life, literally and figuratively. 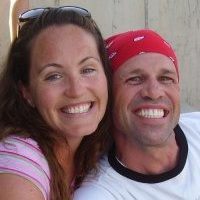 Sally lives just a couple of blocks away from me and I have known her for a few years, but I went to high school with her husband, Ryan, so I have known him much longer. The two are extremely talented performers (and that is an understatement.) They are known in our community for their talents. But to me, they should be known for something far greater—their example of the light and hope of Jesus Christ.

You wouldn’t expect the mother of six children to write a story about infertility, but I have watched Sally and Ryan for many years. I have loved watching their family and the kind way they deal with the world, and the extra dose of love they have always extended to me, my husband, and our children. Sally openly shares her dark days of struggle and her bright ones, but for the longest time I really wanted to know the whole story, so I asked. Her generosity and openness with her story is a true blessing to hear.

Her journey started nearly 15 years ago when she married Ryan at 25. “I already felt like I was old,” she said with a laugh, adding, “you know, living in Utah.” We both laughed at that notion. But the two had grandiose plans. They wanted to have six children, raise them around family, and have the ideal life they had always dreamed of. They wanted to start their family right away.

One year passed. No pregnancy. While not trying to worry, nonetheless, there was some worry. So they decided to see a doctor. “That’s when things got crazy messy,” Sally remembers. She started trying to eat all the exact right foods, rest properly, work out, or not work out, or even work out differently. But, nothing. “We weren’t making any progress and I felt hopeless and helpless,” Sally said of that time.

“I felt like I was in this midst of darkness and I didn’t know how to get out,” she said with sadness. She was also doing everything she could spiritually. She was praying, studying her scriptures, fasting, and Ryan was doing all of those things as well, plus they were doing them together. She became so focused on infertility and trying to get pregnant it was hard to think of other tasks. “This is the thing I was sent to earth to do,” she said of being a mother. She had even received a blessing when she was younger saying being a mother was her primary purpose. But at the end of the day, she wasn’t a mother.

“I was going through these physically painful and painfully emotional treatments. I was doing all the right things, but it was just really, really hard,” Sally said. Luckily, her and Ryan’s relationship stayed strong and they were a good support for each other. She remembers that Ryan would suggest other options for their life like travel that would take Sally's mind off infertility, but she just couldn’t step out of the dark hopelessness she felt she was drowning in. “I just wanted to be a mom. I was hopeless and I was sad,” she said. That lasted for nearly five years.

Then one day she was sitting in the LDS Temple. As she sat, there was a change in her heart. It was a sweet, soft comforting impression—kind of like a warm blanket. It encompassed her. The impression was that she would never get pregnant. She would never give birth to a child, but she would become a mother. She would fulfill her life’s calling —through adoption. “With all of that came a wonderful hope,” Sally said.

When the prompting came, she cried. “I cried so hard when I told Ryan, but they weren’t all tears of grief. They were tears of relief, tears of joy. It was all of that emotion. For both of us. We both cried so hard that night,” Sally said as she recounted the experience. But one thing she knew, she suddenly didn’t feel hopeless anymore. 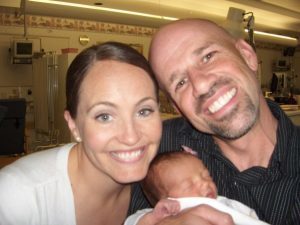 The couple got to work to start the process of adoption, and within a year, they were holding a beautiful new daughter in their arms. Two short years later—another daughter, and two years after that, one more. “It’s unheard of for children who are adopted to be spaced like that, they just came to us,” Sally said with emotion. The road wasn’t easy, there were some bumps in the adoption process with one of their daughters, but the blessings far outweighed the struggles in the process.

“It was like I spent five years wandering in the midst but once that (personal) revelation came . . . it was the best thing that ever could have happened,” she added. And through the process, her testimony of the Atonement of Jesus Christ and His plan has grown by leaps and bounds as well as the plan of agency of choice for God’s children. “Those five years that were harder than anything turned into creating our family and it is so much more perfect than I ever could have imagined,” Sally said with certainty. 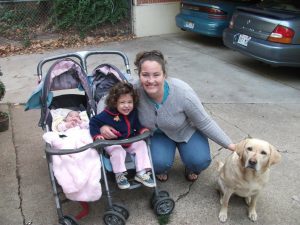 What else left with the hopelessness? The resentment. Sally remembers when she was going through the fertility treatments and struggles to become pregnant, she would look at pregnant women and feel frustrated when they would complain about their difficult pregnancies. “I would think, ‘Well you shouldn’t complain about your back hurting because you are having a baby,'” Sally said. But when the change happened for her, that resentment was gone. Now she feels empathy—she feels bad they have that struggle and knows it is real for them.

As she talked about this, tears came to my own eyes, because I’ve felt her empathy as she watched me with my large clan—with her interest, her love. Now I know the source of that empathy—it comes from her Christlike love and hope in her heart. What a gift!

She also feels that each part of her life where she has felt her struggles have been deep and difficult has prepared for the next hard thing. She served an LDS mission and she knows that prepared her for struggles with infertility. Those infertility struggles? They are helping her cope with struggles now. Her daughters have different degrees of special needs and her husband is earning his Ph.D. right now. Life is busy, life is chaotic, and pretty tough some days, but she knows she can overcome, because she has done it before and she also knows who to rely on to help her through those struggles. 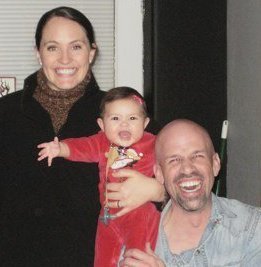 Being prepared to receive answers to prayer and the bright light of hope has been significant in Sally's life. She firmly believes she was receptive to the impression to adopt because she was being obedient—praying, attending church, attending the temple, searching the scriptures, and being open to listen, to have hope.

The Paskins aren’t alone in their infertility struggles. Countless people struggle with this pain every day. My cousin, Sandy Sacks, has also struggled with having children. She had four failed pregnancies and it was very difficult for her. Two were to unknown factors and she was not able to have any more children because of the scar tissue that had built up. “Each time I questioned my faith and why He would gift me with another life, only to take it away so cruelly. When I discovered having children was no longer possible, my faith suffered greatly. In time, I found forgiveness, for myself, and for the troubles life brings. It took many years, tears, and prayers to see that He had a different path for me,” Sandy said. I admire her strength and courage so much!

Another friend of mine, Terri Holmes, also said she found hope through infertility with adoption. “It isn’t the answer for everyone, but it was for me. We have seen many miracles,” Terri said. And I have seen those miracles. Great and powerful for sure.

Sally often shares her experiences to people in our church congregation. It always touches me because I feel her spirit when she talks about it. It helps me overcome my own struggles and while they aren’t the same as hers, it helps me have hope and hope begets peace.  It helps me remember that on the third day the marvelous Resurrection came.

Rachel J. Trotter is a writer at evalogue.life, where we tell personal and family stories that inspire and help you tell yours. She has been writing in a variety of different capacities for 20 years including newspaper reporter, writer, editor, and blogger. She is currently the senior editor and writer at evalogue.life. She loves telling people’s stories. She lives in Ogden, Utah, and is busy raising six children. She loves working on family history alongside her husband, Mat.