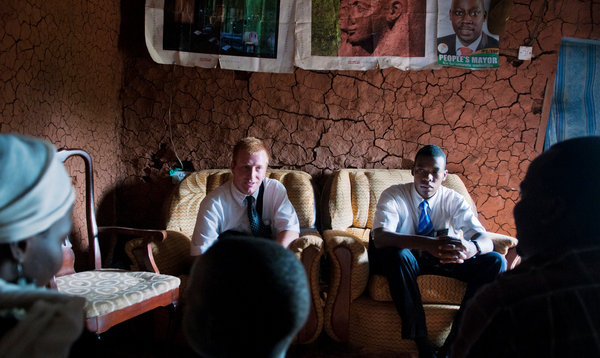 Last summer, Jared Dangerfield was simply 19, skateboarding the streets of suburban Salt Lake City, plugged into the Jewish reggae singer Matisyahu. He had just wrapped up his year at Utah State University, where there was a girl he liked to make laugh.

Memories of college and family are kept in a photo album his sister gave him when they said goodbye, but it is rarely looked at.

“Little time to remember home,” he says. “We kind of have to stay away from the world.” Gone are his friends. Gone is his given name. The next time he will see his mother’s face is 2013. Until then, he is Elder Dangerfield, as it says on his name tag.

Each day he rises with the African sun to say his prayers before venturing into the urban wilderness of Kampala, Uganda, a churning kaleidoscope of motorcycles, street urchins, vegetable carts and pterodactyl-like storks that circle office towers and lampposts. They orbit above him as he makes his way up and down the muddy hills of the capital city, careful to keep his black pants and white shirt clean, scanning faces in search of those who will listen to him speak of his faith. His Mormon faith.