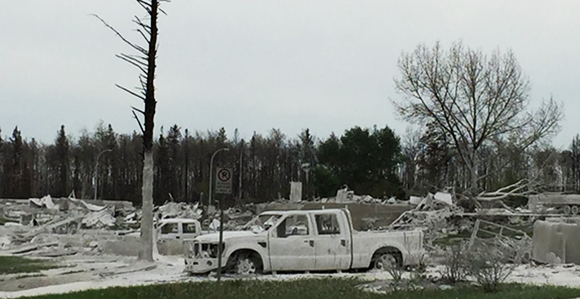 Since June 1, Church members in Alberta, Canada, have been returning to their homes in stages, recovering from the most devastating  fire in Canada's history. See incredible footage of the LDS meetinghouse in Canada which remained unharmed despite being literally across the street from piles of ash and cinders.

Nearly a month after more than 88,000 people were evacuated from Fort McMurray in Alberta, Canada, due to a raging wildfire, residents are beginning to return. Among them are members of the Wood Buffalo Ward.

Edmonton Alberta North Stake President Gordon V. Garside said all members have been accounted for. Ten Latter-day Saint families lost their homes to the blaze, which destroyed 2,400 structures throughout the community, nearly 10 percent of the city. The Church meetinghouse was unharmed, despite being located in one of the heavily damaged neighborhoods of Beacon Hill.