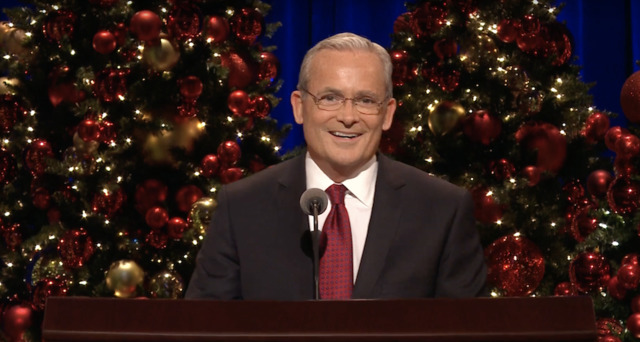 The First Presidency Christmas Devotional has inspired many Latter-day Saints throughout the years. But what has inspired the speakers who have written the talks? In many instances, it’s Christmas songs. Here’s a sampling of the different selections of music referenced by speakers during Christmas devotionals over the years.

In his devotional address on December 8, Elder Kearon shared how he loves the countless reminders of the Christmas season. One of his favorite things to do during this time of year is to let his vision go blurry as he looks at the tiny white lights on his Christmas tree with all the other lights off. With his eyes out of focus, the lights expand, soften, and reflect off of shiny, red ornaments which creates an “enchanting” effect, he said.

Music also plays a large part of the holiday season, he continued, referencing the hymn “Joy to the World” as well as lyrics from Handel’s “Messiah.”

“As my eyes let the lights move in and out of focus on the tree, I am reminded once again of the divine mission of our Savior, which comes sharply into focus in these still moments,” he said.

As Latter-day Saints sing “Let Every Heart Prepare Him Room” from the hymn “Joy to the World" at Christmastime, Elder Stevensen encouraged others to ask themselves how they can better prepare their hearts to receive the Savior.

“How can you prepare room in your heart for Christ, especially during this busy yet wonderful season?” he asked during a December 2018 devotional. “I invite each of us to choose to do something that expresses, in an outward way, our inward feelings about the Savior Jesus Christ as the gift we give Him this year.”

During last year’s Christmas devotional, Sister Eubank shared a story about how she learned all the verses to “Silent Night” as a 6-year-old but didn’t understand the punctuation in the song. Instead of singing, “Son of God, love’s pure light,” she thought the lyrics were that the Son of God loves pure light, as in "He adores anything made from pure light." And so, she tried to figure out how to love pure light the way the Savior does.

Sister Eubank also shared a story of how years ago she was asked to play the piano at her ward’s Christmas Eve sacrament program. Instead of memorizing the piece, she opted to put the score of “Silent Night” on her lap, but it slipped off during the performance. She stumbled through the song and tried to leave the building without talking to anyone, but her Sunday School teacher caught her and told her it wasn’t the performance that mattered, but the effort she put into it. Her teacher's example of loving pure light is something that Sister Eubank has never forgotten.

“The Christmas Story is a Family Story” by Elder Richard J. Maynes:

In a Christmas 2014 devotional, Elder Maynes, a General Authority Seventy, related the hymn “Once in Royal David’s City,” to the reality of Mary’s role as the mother of Christ.

“Mary came to understand her true divine nature and willingly submitted to her unique maternal role,” said Elder Maynes. “She found joy in being obedient, for she stated, “My soul doth magnify the Lord, and my spirit hath rejoiced in God my Saviour.”

“The Real Joy of Christmas” by President Thomas S. Monson:

For the 2013 Christmas devotional, President Monson quoted “In the Bleak Midwinter,” the verses of which were written by the British poet Christina Rosetti. The words were later set to music by Gustav Holst in 1906. President Monson used the lyrics of the Christmas song to encourage others to give their hearts to the Savior.

“Giving, not getting, brings to full bloom the Christmas spirit,” he said. “To catch the real meaning of the spirit of Christmas, we need only drop the last syllable, and it becomes the Spirit of Christ.”

“Glory to God” by Elder Ronald A. Rasband:

Elder Rasband of the Quorum of the Twelve Apostles shared the background to the hymn “Far, Far Away on Judea’s Plains” in his 2013 Christmas devotional message.

The song was originally written by a Scottish convert, John Menzies Macfarlane, who was 18 years old when he journeyed to Salt Lake with his mother and brother in 1852. Professionally, Macfarlane was a surveyor, builder, and a district judge, but he was most recognized for his music and started a choir in Cedar City which traveled around Southern Utah. Macfarlane moved to St. George with his family after the encouragement of Elder Erastus Snow, who heard him perform in the area.

In 1869, Elder Snow asked Macfarlane to put on a Christmas program during a particularly difficult year in order to lift the community’s spirits. Macfarlane wanted a new piece for the event, but no matter how hard he worked to compose, nothing came to him. However, after prayer, he awoke one night with the words and music to “Far, Far Way on Judea’s Plains” in his head, which he immediately wrote down using the keyboard of his parlor organ while his wife held a light for him so he could see.

Although Macfarlane had never seen Judea or realized that the plains were in reality rocky hillsides, the song stands as a witness of the Savior’s birth in Bethlehem.

“Gifts of Peace” by President Henry B. Eyring:

President Henry B. Eyring recalled the first time he heard Handel’s “Messiah.” He shared during a 2016 Christmas devotional how he was a young boy when he felt something in his heart as he sat in the balcony of the Salt Lake Tabernacle—which he now recognizes as the Holy Ghost confirming to him that the words he heard that night were true.

Testifying that the Savior is the Lamb of God who was “sent to break the bands of death by His atoning sacrifice,” President Eyring then quoted the hymn “Hark! The Herald Angels Sing” and promised that because of Christ, everyone can have the opportunity to serve Him and spiritually have new life.

“Oh, Come, Let Us Adore Him — And the Plan” by Sister Linda K. Burton

If Sister Burton were to make a list of her favorite Christmas hymns, “Oh, Come, All Ye Faithful” would be among those on the top as it beckons everyone to come unto Christ, she said during the 2015 Christmas devotional. In her address, Sister Burton shares two Christmas memories.

Her first Christmas memory she shares in the talk is as a 14-year-old living in New Zealand while her father was a mission president there. At the time, she was missing Christmas at home and her favorite traditions there. Then one evening while she was at a Family Home Evening activity, her family received word that her grandfather had suffered a stroke. He passed away shortly afterwards in Salt Lake City on Christmas Eve. It was the first time she realized the Savior’s role in the Plan of Happiness and that they would be reunited one day.

Sharing another Christmas memory, Sister Burton shared how, one year during the holiday season, she received a diagnosis of cancer which rocked her family’s world. Suddenly, her eternal marriage, her testimony, and her family were all that mattered to her that year. The primary song “He Sent His Son” also brought her gratitude for the Father’s plan and the path of discipleship.

“There was a special spirit that hovered over our home that year, blessing us with peace and love for one another that I will never forget,” she said. “As we were stretched in our circumstances, we seemed to more keenly feel spiritual impressions as we pondered and gave thanks for the gift of our Savior, Jesus Christ, and for our Heavenly Father’s glorious plan of salvation.”

“The Light and The Life of the World,” by Elder David A. Bednar

Quoting how the Savior is the “Everlasting light” as referenced in the hymn “O Little Town of Bethlehem,” Elder Bednar testified during the 2015 Christmas devotional that Jesus Christ is the light of the world.

“Many of our memorable and enduring Christmas traditions include different kinds of lights﻿—lights on trees, lights in and on our homes, candles on our tables,” he said. “May the beautiful lights of every holiday season remind us of Him who is the source of all light.”

“The Generous One” by then-President Dieter F. Uchtdorf:

“The Carol of the Bells” wasn’t originally a Christmas carol, said President Uchtdorf in a 2015 Christmas devotional. The centuries-old Ukrainian folk song was originally known as “Shchedryk,” which is translated as “The Generous One.”

According to President  Uchtdorf’s talk, Ukranian families would sing the song at the beginning of the new year. Original lyrics spoke of a swallow that “flies into a family’s house and foretells the marvelous good fortune that awaits them in the coming year.”

"Isn’t that the message of Christmas?" he asked. "Even when the world may appear quite dark﻿—when things aren’t going right, when our hearts are overflowing with disappointment and worry, even in the midst of sadness and sorrow﻿—we sing about 'joy to the world' and 'good will toward men' because of Christ, who came 'to give light to them that sit in darkness.'"