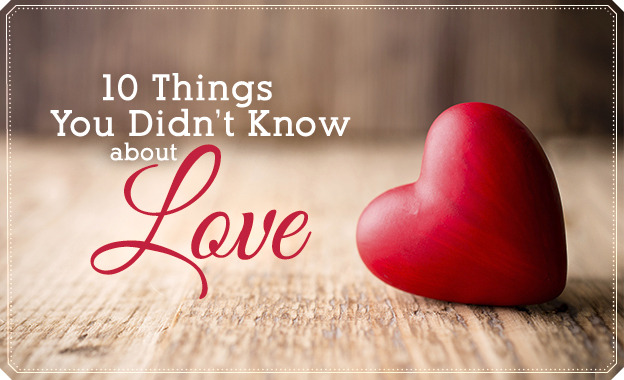 10 Things You Didn't Know about Love

Light the candles and get out the love poems--it's Valentine's day! If you need some conversation tidbits to impress your special someone tonight, we got the scoop on marriage, love, weddings just for you. Check out what we found:

The History of Love

- The ancient Greeks believed that the fourth finger on the left hand contained the vena amoris, or the “vein of love,” which supposedly ran straight to the heart. This is why wedding rings are worn on the left “ring” finger.

- Celtic knots are famous symbols of eternity and love, but other cultures have also used knots to signify love. Anciently, young Arabic women would send secret messages to their lovers using intricate knots.

- Apples were once considered symbols of love. The Celts believed that the apple represented love because it lasted so long after being harvested.

- Las Vegas, Nevada, the wedding capital of the US, issues approximately 120,000 marriage licenses each year.

- According to one survey, 70% of people worldwide report feeling loved in their average day.

- More than half of people worldwide (56%) believe in love at first sight.

If you're still scrambling to make Valentine's Day plans, think about throwing together a delicious dinner for your sweetheart--get a full menu from the authors of the popular Our Best Bites series.