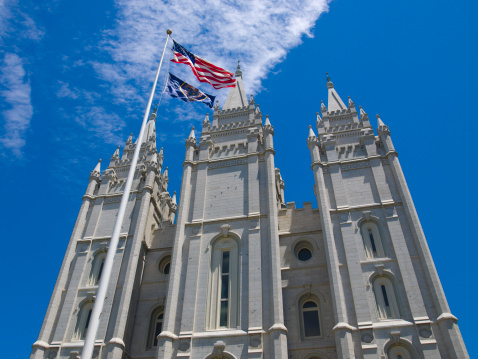 10 Things You Never Knew About the U.S. Flag and the Church

Throughout the history of the Church, our leaders have praised America and what its flag represents. Read on for some fun and historical facts you might not have known about this patriotic symbol.

LDS prophets have had a lot to say about the United States, from the Declaration of Independence to the Constitution to the flag we fly.

"When the day comes in which the Kingdom of God will bear rule," Brigham Young declared, "the flag of the United States will proudly flutter unsullied on the flag staff of liberty and equal rights, without a spot to sully its fair surface; the glorious flag our fathers have bequeathed to us will then be unfurled to the breeze by those who have power to hoist it aloft and defend its sanctity."

The flag of the United States does fly proud over American soil, and every June 14th, Americans celebrate Flag Day to commemorate the anniversary of the day the Continental Congress explained the basic guidelines for the American flag. Read on to learn more about this patriotic symbol and its history—including its history with the Church:

1. No one knows who sewed the first official US flag. However, Betsy Ross is most commonly credited. Ross was indeed a flag maker, but there is no credible historical evidence to prove she was responsible for the design or creation of the first American flag.

2. In 1777, the Continental Congress approved the design of a national flag. It was to have “thirteen alternate stripes red and white,” and “the Union be thirteen stars, white in a blue field, representing a new Constellation.”

3. Each color on the flag stands for something. Although the colors didn’t stand for anything when they were originally chosen, the colors were given meaning when the Great Seal of 1782 was created. Red stands for hardiness and valor; white stands for purity and innocence; and blue represents vigilance, perseverance, and justice.

4. On the Fourth of July, 1885, Prophet John Taylor directed all LDS church buildings fly the flag at half-staff to protest polygamy persecutions. LDS homes and businesses participated, including the flags at Salt Lake City Hall, the Salt Lake Theatre, the Deseret News, and other Church-controlled buildings. When some citizens protested, and raised the flags themselves, the Deseret News kept its flag at half-staff until dark and defended the action as an exhibition of sorrow by Utah's people "over the decadence of their liberties."

5. When Utah became the 45th state on January 4, 1896, a 74-foot by 132-foot flag was made to celebrate. The new design incorporated an enlarged 45th star representing Utah. (See the next flag fact for how this was possible.) Because statehood came after much struggle, the Saints in Utah hung the flag along the roof of the Tabernacle. The Saints also hung a large flag on the Temple exterior as part of their celebration.

6. Before 1912, each flag maker was able to decide the proportions and placement of the stars. As long as there were enough stars and they were on a blue background, the stars could be in whatever pattern the flag maker wanted. In 1912, however, specific diameters of stars and length to width ratios of stripes were added to the United States Code.

7. There have been 27 official versions of the US flag. Each version has a different number of stars—the 24th design incorporated a 45th star for the new state of Utah and was used for 12 years (from July 4, 1896 through July 3, 1908 when Oklahoma became a state). The current 50-star flag has been the official American flag for 53 years—longer than any other design.

8. The current 50-star flag was designed by a 17-year-old student. In anticipation of Alaska and Hawaii becoming states, Robert G. Heft designed the current flag as part of a project. His teacher gave him a B-, but when President Dwight D. Eisenhower chose Heft’s design for the new flag, his teacher changed his grade to an A.

9. There are six American flags on the moon. Each of the six original 50-star US flags planted on the moon by American astronauts still fly, although after spending decades on the moon, all but one of the flags has been completely bleached white.

Left: The Church Office Building in Salt Lake City flies the US flag at half-mast.