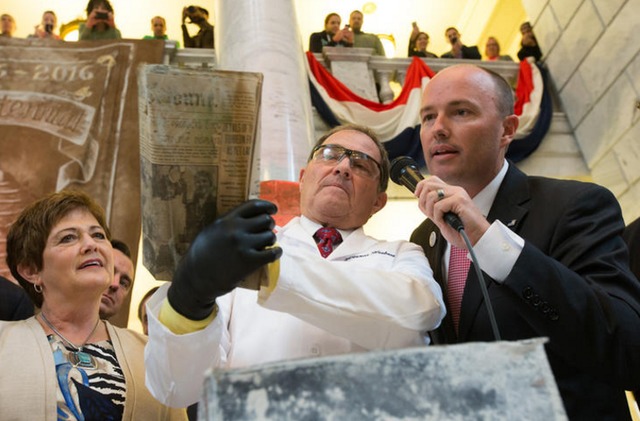 A 102-year-old time capsule from Utah's State Capitol was cut open recently, revealing many interesting treasures related to the LDS Church. "I have goosebumps," Allyson Gamble, an organizer of the event, said at the unveiling.

Lt. Gov. Spencer Cox took a moment to reassure Utah's centenarians as they gathered Monday in the Capitol rotunda for the opening of a 102-year-old time capsule.

"You have all aged better than that box," Cox quipped. "You look very, very good."

Many of Utah's residents who have lived to the age of 100 were on hand for their annual celebration with Gov. Gary Herbert, but this year's party was particularly special because it coincided with the unveiling of the capsule's contents—which had been sealed inside one of the Capitol's pillars on the grand staircase since April 4, 1914.

"Those are some of those shoulders we build on today," Herbert said, gesturing to the centenarians mixed in with a crowd of about 200 people, moments before he donned a white lab coat and protective glasses and cut the box open. "I hope we remember and are appreciative to that."