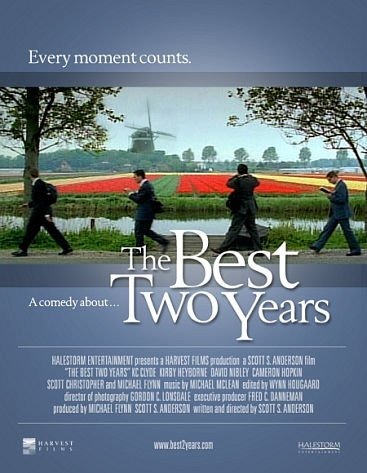 Confession: I love movie quotes. It’s an addiction, really. And after I got to thinking about some of my favorite ones, I realized that many of them come from some classic Mormon movies. If you’ve seen any of these great films, chances are you’ll remember these great lines. And if you haven’t seen them, well there’s a quick way to get your hands on them. Find them all at DeseretBook.com.

Don't forget to tell us what your favorite Mormon movie quote is in the comments!

1. After balloons show up at Jonathan's door, his friends inhale all the helium and then realize that this is actually an eleborate scheme to ask him to the ward dance:

“Papa Smurf! Papa Smurf! This came out of the balloon. It looks like another piece to the puzzle!”

2. DeVerl: “I think we met in the pre-existence." (After finally getting a girl to hold his hand in a movie.)

3. When Jared gets discouraged after returning home from his mission, his dad tries to give him a pep talk:

“You're not just an RM: you're an LDS RM, who's trained at the MTC who became a DL a ZL, and an AP, who was promised long ago by his bishop through a PPI after BYC that someday he'd be the EQP. I smell GA!”

Pride and Prejudice: A Latter-day Tale

4. When Darcy tries to ask Elizabeth out, he doesn't do it in the most flattering way--basically insulting her the whole time:

"I find you strangely attractive."

5. While at the grocery store in a very depressed state, the girls can't decide which ice cream to buy:

6. Over the pulpit, an offended would-be date of Elizabeth's decides to use her as a "personal story" in his talk:

"I had a kind of funny encounter with someone in the congregation who shall remain anonymous, but for the sake of the story we'll call her Elizabeth B . . . No, no, E. Bennett."

7. On the first day of his mission, Elder Calhoun tries to get to know his trainer, Elder Rogers:

Elder Calhoun: "Hey, do you have a girlfriend?"

Elder Calhoun: "Are you writing anyone?"

Elder Calhoun: "And you don't have any sisters?"

8. Elder Rogers drags his new trainee, Elder Calhoun, to the grocery store after a long day of fasting. But after miraculously giving a Book of Mormon to a new investigator in the "liquid beverage" aisle, Elder Calhoun thinks that Elder Rogers must have been inspired to go to there:

Elder Calhoun: “Where do you think he said we should go? The gro-cer-y sto-re.”

9. The boys of Everclean--the hottest Mormon boy band--come up with a brand new ballad about the pioneers:

10. After a very long day, the elders try to decide the best way of getting home:

Elder Allen: “Should we take the bus?”

Elder Dalton: “I don't want to take the bus.”

Elder Allen: “You're not tired?”

11. “Mahana, you ugly.” (This classic simply needs no elaboration.)

12. At the lumber store, someone asks Carmine the mobster to cut a 2x4 in half with a wood saw:

Customer: "You've used one of these before?"

Carmine: "Yeah, but not to cut wood."