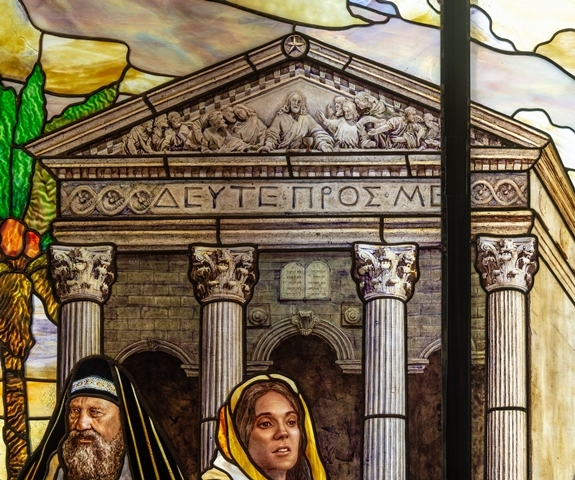 At the announcement of a temple to be built in Rome, Italy, there was an audible gasp throughout the Conference Center in Salt Lake City and, no doubt, in many chapels and members’ homes around the world. Such was the case in Tom Holdman’s home, where he literally jumped from his seat and exclaimed, “I will do that temple glass!”

After Tom was contracted to do the windows in the Rome temple, he was also commissioned to create a 20 by 7-foot window for the visitors’ center. This was to be the first image visitors would see as they entered the building, so Tom wanted just the right theme. Together with designers in the missionary department, Tom and his team brainstormed several options: Christ calming the sea, calling His apostles, healing those in need, and calling the children to come to Him. Each design concept was drafted, and the healing theme was ultimately chosen. Since this would be in the visitors’ center, Tom and the artists at Holdman Studios were encouraged to make the window a teaching tool as well as a beautiful piece of art. Leaders in the missionary department envisioned something that would be engaging for children and teens as well as for adults—something missionaries could use as they taught and viewers could return to again and again, discovering something new each time. With that goal in mind, the artists determined to depict—overtly and subtly—not only important aspects of Christ’s life, mission, and ministry but also all of His parables and miracles. The following are a few examples:

Signs of His Birth (Matthew 2 and Luke 2)

In the window, artists chose to represent Christ’s birth by placing a myrrh plant amid the other plants in the lower left-hand corner with actual chunks of frankincense interspersed around it: 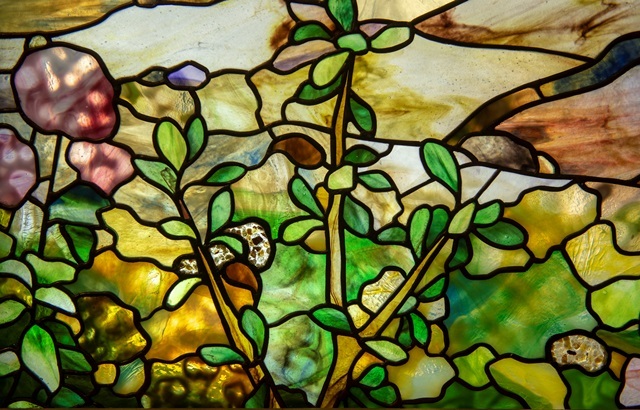 Gold is represented by the coin partially concealed under a stone by the foot of the beggar: 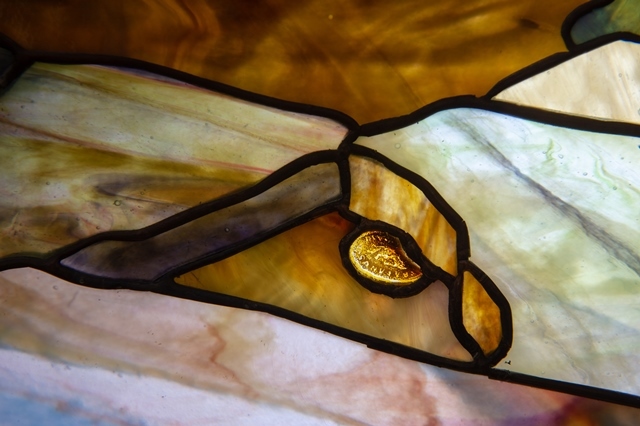 There is a carved star at the top of the building behind Jesus, and one sheep representing the shepherds who came to worship the newborn Lamb of God.

Additionally, viewers can find two turtle doves in the canopy-covered shop on the right side of the mural: 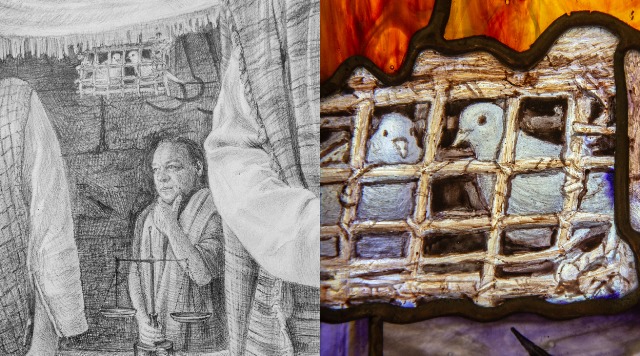 Joseph and Mary were so poor that they could not afford to sacrifice a lamb when the baby Jesus was presented at the temple. The Law of Moses made allowance for the poor to offer two doves instead of a lamb. Mary’s “Lamb” would be offered as a sacrifice for all, 33 years later. These symbols are easy to overlook when viewers first see the window, just as Christ can be easily overlooked—even by those celebrating Him at Easter and Christmas.