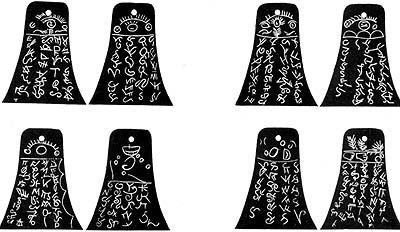 A recent electronic and chemical analysis of a metal plate (one of six original plates) brought in 1843 to the Prophet Joseph Smith in Nauvoo, Illinois, appears to solve a previously unanswered question in Church history, helping to further evidence that the plate is what its producers later said it was—a nineteenth-century attempt to lure Joseph Smith into making a translation of ancient-looking characters that had been etched into the plates.

Joseph Smith did not make the hoped-for translation. In fact, no evidence exists that he manifested any further interest in the plates after early examination of them, although some members of the Church hoped that they would prove to be significant. But the plates never did.

The complex yet fascinating story behind this little-known event in Church history follows:

In Nauvoo, Illinois, during the first week in May 1843, the Church publication Times and Seasons printed an article entitled “Ancient Records” which reported the alleged discovery of six ancient brass plates in an Indian mound near the town of Kinderhook, fifty-five miles south of Nauvoo in Pike County, Illinois.

“On the 16th of April last a respectable merchant by the name of Robert Wiley, commenced digging in a large mound near this place: he excavated to the depth of 10 feet and came to rock; about that time the rain began to fall, and he abandoned the work. On the 23d he and quite a number of the citizens with myself, repaired to the mound, and after making ample opening, we found plenty of rock, the most of which appeared as though it had been strongly burned; and after removing full two feet of said rock, we found plenty of charcoal and ashes; also human bones that appeared as though they had been burned; and near the eciphalon [correctly spelled “encephalon,” or head] a bundle was found that consisted of six plates of brass, of a bell shape, each having a hole near the small end, and a ring through them all, and clasped with two clasps, the ring and clasps appeared to be of iron very much oxidated, the plates appeared first to be copper, and had the appearance of being covered with characters. It was agreed by the company that I should cleanse the plates: accordingly I took them to my house, washed them with soap and water, and a woolen cloth; but finding them not yet cleansed I treated them with dilute sulphuric acid which made them perfectly clean, on which it appeared that they were completely covered with hieroglyphics that none as yet have been able to read.”