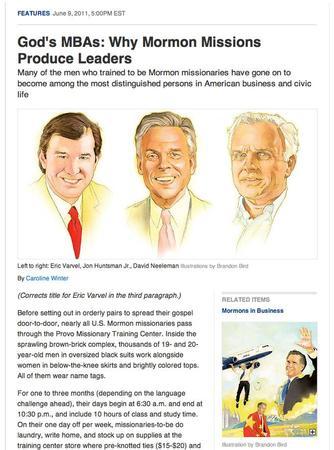 For its 2011 annual retrospective, Time magazine named Mormonism the Religion of the Year, accompanied with an obligatory photo from the Book of Mormon Musical. The distinction isn't offered every year, but in light of the musical, two presidential candidates and the rise of Glenn Beck — funny no one ever mentions Senate Majority Leader Harry Reid in these lists — the editors made an exception.

The Time write-up itself was notably upbeat. "The Church of Jesus Christ of Latter-Day Saints has always been the religion of the future — demographically, organizationally, fervently. Well, the future is now," the blurb began. After running through the highlights, it concluded, "Mormon visibility has helped dispel some stunning bits of ignorance. … By being part of the social and political conversation, this original, innately American religion has become even more a part of the mainstream American fabric."