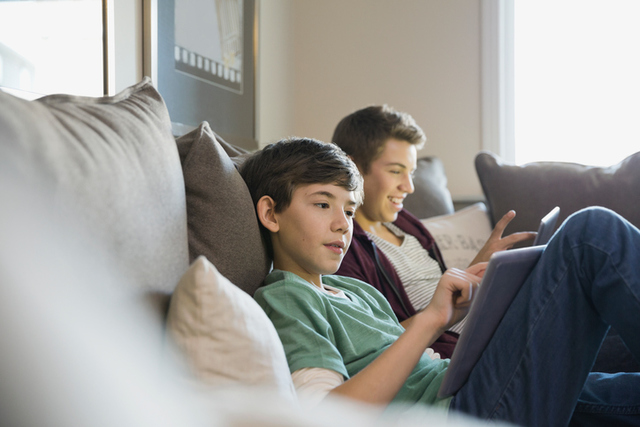 With so many children using the internet at a young age, it's not if but when they will encounter harmful material.

"I think it’s really important for parents to know that they will deal with this and it’s important to be prepared," says Dr. Julie de Azevedo Hanks, a licensed clinical social worker and psychotherapist. "It doesn’t mean you have bad kids. It means you live in a fallen world."

While Hanks, founder and director of Wasatch Family Therapy, says there are many dangers for children on the internet today, there are three in particular that seem especially connected to each other:

According to a study by the National Center for Biotechnology Information, children who are regularly exposed to violence through TV, video games, the internet, movies, or text messages, are at a higher risk of violent behavior. The study found that viewing or reading about violent acts on a regular basis online has the same effect as seeing them in real life. This leads to an increased risk of violent behavior in children.

When the Indiana University School of Medicine examined a group of young men after they played a violent video game for about a week, they found a difference in brain activity from before and after the week was up. There was decreased activity in the prefrontal cortex, or thinking part of the brain responsible for self-control, and increased activity in the amygdala, or the emotional center of the brain responsible for anger and impulsive behavior.

And she is not alone in thinking parents do not realize the impact of violent media. In a survey of 24,000 children conducted for the U.K. Council for Child Internet Safety, children were just as upset by violent acts on YouTube videos as they were by pornography or cyber bullying.

With the ability of violent acts to change a child's behavior and affect them emotionally, de Azevedo Hanks says it's important for parents to do all they can to prevent their children from viewing violent acts on any electronic device.

"Consistent exposure changes our brain, and you can’t get that out—you can’t un-see something," she says.

► You'll also like: The Delights and Dangers of Media

According to an article by the American Psychological Association, about 40 percent of children ages 10 to 17 visit sexually explicit sites, whether intentionally or accidentally.

And one-third of those children was actively looking for pornography.

Little scientific research is available about the behavioral effects pornography has on children. But many scientific findings, including those found in a study by the Journal of Family Issues, show commonalities concerning the effects of pornography on young adults, including the following:

2.  Twice as likely to think marriage would become obsolete and were accepting of infidelity in relationships

3. Viewed rape as not a serious crime

4. Decreased desire to have children

5. More likely to seek extreme and deviant forms of pornography

While the definition of pornography can be vague, it's important for parents to realize the different kinds of pornography a child could have access to online.

"We don’t talk about the combination of sexual material and violence, and that is the terrifying part as a parent—when violence and sexuality are consistently linked together," de Azevedo Hanks says. "That’s a different kind of image than a picture of a voluptuous woman in a small bikini. Those are totally different things and we don’t really make distinctions between types of pornography."

Violence and pornography together can be particularly destructive, she says, because it shows violence toward women as an acceptable practice.

In a study by Mary Anne Layden, director of the Sexual Trauma and Psychopathology Program Center at the University of Pennsylvania, Layden found 40 percent of the 100 women she interviewed at the center said their partner viewed pornography before the abuse.

While a parent's initial response to finding out their child is viewing pornography may be anger, de Azevedo Hanks says this could lead to the child "shutting down" rather than seeking additional help from parents.