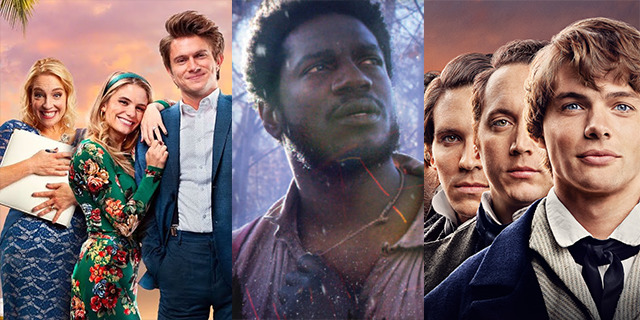 School's out, the kids are home, and everyone is just a little stir-crazy from the events of the last year. Treat your family to some wholesome entertainment with one of these brand-new Latter-day Saint films, all releasing this summer!

Once I Was Engaged

A new coming-of-age comedy from the creators of Once I Was a Beehive! A stereotypical uber-planner, Carrie Carrington (Lisa Valentine Clark) has her daughter’s entire life planned out. The Plan was working for Bree, too—that is, until Thys Chesterfield (aka Mr. Perfect) came on the scene, and well . . . you know what they say about the best-laid plans. All too soon, Bree has a ring on her finger and Carrie Carrington is forced to abandon Plan A in order to plan the wedding of the century. She built an ark for girl’s camp—wait to see what she does when her daughter’s future is on the line!

His Name is Green Flake

Inspired by the true story of a pioneer hero, His Name Is Green Flake follows enslaved pioneer and Latter-day Saint Green Flake (Mauli Junior Bonner), and how his courageous cross-country journey to prepare the way for the Saints was integral to the “Mormon Migration” and the settlement of Utah.

Virtual watch parties—including a Q&A host segment and film screening—of this award-winning film will be happening on Fridays and Saturdays in June and July.

Proceeds from this film will go toward building a monument in Utah to honor early African American Latter-day Saint pioneers.

For nearly 200 years, skeptics and critics have attempted to explain away what David Whitmer, Oliver Cowdery, and Martin Harris claimed—that they had seen angels and hefted golden metal plates containing ancient inscriptions. Now, for the first time, their amazing untold true story comes to the big screen in the family film event of the year—Witnesses. Featuring a world-class cast, Witnesses has been hailed as the most significant and ambitious film dealing with the early history of The Church of Jesus Christ of Latter-day Saints and the translation of the Book of Mormon ever made.

BONUS: Watch Lamb of God on DVD at home!

This unique concert film brings composer Rob Gardner’s work to your home for the very first time. This filmed performance of Lamb of God features breathtaking performances, new orchestration, and phenomenal soloists. Gardner's oratorio has been compared to Handel’s Messiah and Mozart’s Requiem and is the perfect way to bring your family together for an uplifting entertainment experience.