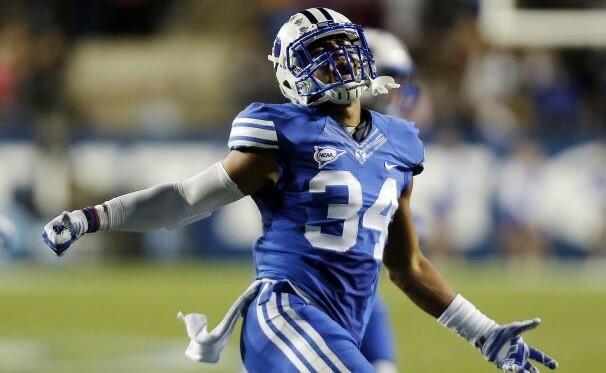 In just two weeks, the Kansas City Chiefs and San Francisco 49ers will take the Miami field to compete for the Super Bowl.

While these three all have ties to BYU, they also have stories of faith connected to The Church of Jesus Christ of Latter-day Saints.

Fred Warner began his career as a starter for BYU in 2014. According to BYU, Warner is a self-proclaimed “mama’s boy.” He was recruited by many college programs, but ultimately chose BYU because of his mother’s influence. Laura Warner, his mother, told BYU “I’m a convert to the LDS church. I joined the church when I was in high school. I wanted Fred to continue to grow in the church and I felt if he could play anywhere, why not play for a school where he could also grow as a man and priesthood holder.”

In 2018 after his senior year at BYU, Warner was drafted by the 49ers in the third round of the NFL draft. Warner has started all 32 regular-season games and was named NFC’s November Defensive Player of the Month. Warner told the Deseret News that he contributes his success to his connection with his family and “preparing day in and day out, and doing the little things right.”

Daniel Sorensen has made a name for himself with the Kansas City Chiefs. In 2014, Sorensen was an undrafted free agent that no agent wanted to sponsor. That is until Andy Reid personally invited Sorensen to the Chiefs’ camp. ESPN reports that while waiting to learn of his fate on cut-down day, Sorensen and his wife decided to go to the temple. He left his phone in the car and it overheated, which meant he had to hold his phone next to the air conditioner vents for 10 minutes before learning of his fate. He had made the team, and then later was cut.

Deseret News reports in an article outlining Sorensen’s temporary downfall that, “He began his NFL career with one of the worst performances of his career and was demoted to the practice squad.”

Six years later, Sorensen has proven himself. He is a starter for the Chiefs and has gained the title “Dirty Dan” for being “a nice Latter-day Saint guy who turns nasty once a game kicks off. The name came not because he was a dirty player but because he played hard," according to Deseret News.

Andy Reid, a former BYU offensive lineman and grad assistant, began his NFL coaching career in 1992 when he joined the Green Bay Packers as an assistant coach. Reid later joined the Philadelphia Eagles as head coach. In 2005, Reid took the Eagles to Super Bowl XXXIX, where the Eagles lost to the Patriots. In two weeks, Reid will have another chance at the trophy.

Reid is guided by his faith in both football and his personal life. Reid converted to the Church while attending BYU in the late seventies, according to Deseret News.

Reid has relied on this unwavering faith through personal and professional challenges, including the unexpected loss of his son in 2012. Later that season, Reid was released from his job as head coach with the Eagles.

Reid continues to use his faith to connect and inspire his players. Deseret News reports what Sorensen, one of Reid’s current players has said about Reid, “He seems to know everything somehow. If there is something that happens, good or bad, on the practice field or somewhere else, he knows about it and cares about it. His ability to remember things and to hold people accountable to the details he asks of players and those who work for him is truly remarkable.”

Sorensen is also a Latter-day Saint and there has been a mixing of football and faith between him and Reid. “He has his family there [in Kansas City] as well. I see him at some church events and family things, he goes to like a baby blessing, and he’s there to lend support,” Sorensen told Deseret News.

Super BowlSuper Bowl,
Comments and feedback can be sent to feedback@ldsliving.com