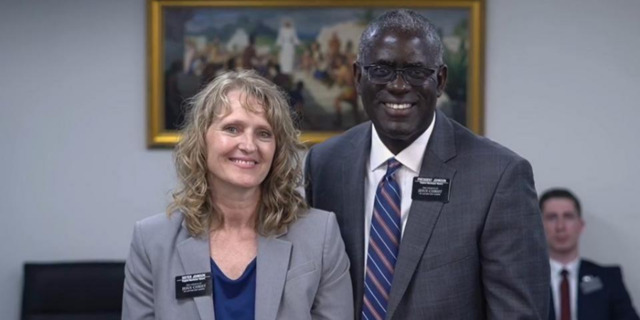 3 things you might not know about this General Authority and mission president: Peter M. Johnson

But there might be a few things you don’t know about Elder Johnson. An article from Newsroom highlights his current responsibilities and his journey to Christianity, among other interesting facts.

1. He grew up in an interfaith household.

Growing up, Elder Johnson was introduced to the Jehovah’s Witnesses and Baptist faiths through his parents’ beliefs. As a teenager, Elder Johnson decided to join the Nation of Islam and become Muslim. He recognizes how these opportunities to develop his spirituality helped prepare to him to learn about Jesus Christ and join The Church of Jesus Christ of Latter-day Saints.

2. He and his wife currently preside over the England Manchester Mission.

Elder Johnson and his wife, Sister Stephanie Johnson, are assigned to serve as leaders of the England Manchester Mission from July 2020 to June 2022. In the article, Sister Johnson shares how they settled in right away: “It was amazing to feel instant love and gratitude for each missionary in the Manchester Mission. That is the miracle of serving God and one another.” Elder and Sister Johnson are happy to be in England and are eager to help others receive the restored gospel.

► You may also like: Are General Authorities normally called to serve as mission presidents?

3. He was a tenured associate professor prior to his call as a Seventy.

Read the full article at Newsroom to learn more about Elder and Sister Johnson, including how the COVID-19 pandemic affected their arrival in England, how both played collegiate basketball, and how they combat prejudice as a biracial couple.