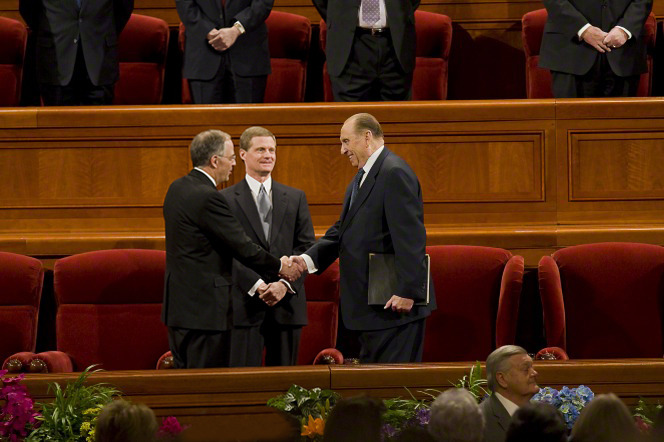 He grew up on a dairy farm in Pocatello, Idaho.

He says, "I milked a lot of cows and moved a lot of irrigation pipe. I can remember that on Christmas morning before we opened our presents, we had cows to milk."

While working with cows, he learned a lesson about spiritual cleanliness. One night his father woke him early so that the two of them could retrieve and butcher the carcass of one of their cows, which had been hit by a car. "We didn't finish until about 3 in the morning," remembers Andersen. "The smell, the slime, the dirt, and the filth clung to me."

When they were finished, Elder Andersen cleaned up, feeling great relief. "The exhilaration of being physically clean," he said, "became a memorable metaphor for spiritual cleanliness."

He is fluent in French, Portuguese, and Spanish

He learned French as a young missionary in the France Mission, then returned to be mission president of the French Bordeaux Mission (at the age of 38!) and decided to learn Spanish. He was later called to serve in the Brazil South Area Presidency where he learned Portuguese.

Young Neil L. Andersen as a missionary in France. LDS.org

He served as Executive Director of the Church Audiovisual Department

In that capacity, he supervised the audiovisual production of The Testaments: Of One Fold and One Shepherd. He also oversaw the installation of the audiovisual systems in the conference center.

He met his wife, Kathy Williams, when he was campaigning for student body vice president at BYU

He jokingly said, "Kathy was our best campaigner, and we got married to repay a campaign debt." Kathy recalls, "I thought he was the most remarkable man I had ever met, and that holds true to this day and forever."

And his French came in handy when he was striving to woo her:

When I fell in love with Kathy, I wondered how an insecure Idaho farm boy could attract a beautiful, intelligent woman from Florida. I then remembered one talent I possessed: I had served my mission in France, and I spoke French. I had been told that young women loved to hear French spoken to them. But, to my dismay, I realized I did not know the French words of romance. I only knew missionary words. I won Kathy’s heart with ma chérie at the front, je t’aime at the end, and the plan of salvation in between.

Neil L. Andersen and his wife, Kathy, were married in the Salt Lake Temple in March 1975. LDS.org

He loves playing basketball with his family

The Andersens’ oldest daughter, Camey Hadlock, says, “Daddy [an endearing term still used by his sons and daughters] always made time for the children. For example, he took each one individually to breakfast with him once a month. He let us pick the place for breakfast and the topics we would talk about. We looked so forward to having his undivided attention.”

Derek Andersen remembers his dad making time to play: “Growing up, we loved playing basketball as a family. He’d come home from work, and we’d team up against my older brother and play basketball together.”

And he and Kathy were so faithful in having family scripture study and singing a hymn each night that the children would do it alone if their parents returned home late.