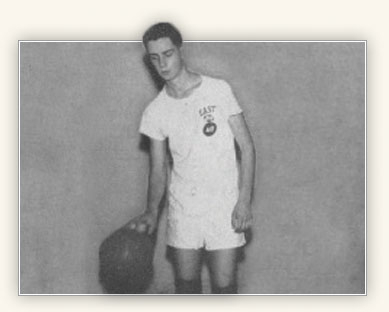 Henry B. Eyring, who went by "Hal," always kept studies as a priority, but he made time to play high school basketball.

When his father, a renowned chemist, realized his son did not share the same passion for science, he encouraged him to study a different field. Even so, President Eyring earned a bachelor's degree in physics from the University of Utah.

2. President Eyring has an artistic side.

“Hal particularly enjoyed drawing and painting as he traveled,” the book I Will Lead You Along explains. “He took postcard-sized art paper and, while waiting in an airport or taking a private moment in the home of a generous host, would capture a scene of an intriguing place or person. On a long trip, Kathy and the children might receive one of these original postcards in the mail. Upon his return home, Hal would send a similar custom-made thank-you note to his host.”

We might not ever personally receive one of these treasured, hand-crafted notes, but we can enjoy President Eyring’s artistic style below:

This watercolor of the Hawaiian surf captures the motion of the waves near a small beachfront structure. Of President Eyring's paintings, President Uchtdorf has said, "By painting these things, [President Eyring] showed me that he related to other parts of the world in a very deep, spiritual, emotional way."

If you’ve never sat in the front at a Stake Conference, take a look: this sketch depicts Elder Eyring’s view of the congregation from the stand. It was drawn after his call to apostleship.

While taking out the trash at home one day, Elder Eyring received a phone call from President Gordon B. Hinckley, then prophet. Surely he had the wrong number.

Uncertainty shaped Hal’s response to a phone call that came to the Eyring home on the Thursday evening before general conference. He had left the office a bit before five o’clock and driven home. After parking the car, he walked down the Eyrings’ steep driveway to retrieve an empty garbage can. He was wheeling the can up the driveway when Kathy stepped into the open garage with a portable phone.

“I know who this is!” President Hinckley replied. The ensuing conversation was short. Hall accepted the call, saying he would do anything President Hinckley asked and that it would be an honor to serve with him and President Monson. President Hinckley bade Hal good-bye with no more explanation or expression of emotion than he had offered in calling him into the Twelve. Hal put the garbage can away and shared the news with Kathy.

(As told in President Eyring's biography, I Will Lead You Along.)

4. President Eyring left his position as a Stanford professor to serve as president of Ricks College.

When Neal A. Maxwell—as Commissioner of the Church Educational System—said, invited Henry B. Eyring to serve as president of Ricks College (now BYU-Idaho), he told Commissioner Maxwell he would need to pray about it. Finally, the answer came. “I heard a voice so faint that I hadn’t paid attention to it,” President Eyring recalls. “The voice said, ‘It’s my school.’ ” He called Commissioner Maxwell and said, “I’m coming.”

5. President Eyring and his wife, Kathy, have six children and have been married for nearly 52 years.

Henry B. Eyring married Kathleen Johnson in July 1962 in the Logan Utah Temple. After nearly 52 years of marriage and raising six children, they have learned a few things about keeping marriage strong.

One of the love lessons couples can take from the Eyrings is to continue courtship after marriage. Consider the following story as told in I Will Lead You Along:
"After dinner we watched the movie Forever Young with Mel Gibson. The romantic ending is of young love reunited. The music at the end of the film, as it was beginning, was Billie Holiday singing 'The Very Thought of You.' We, Kathleen in tennis shoes and I without shoes, danced on the basement carpet until the last note."