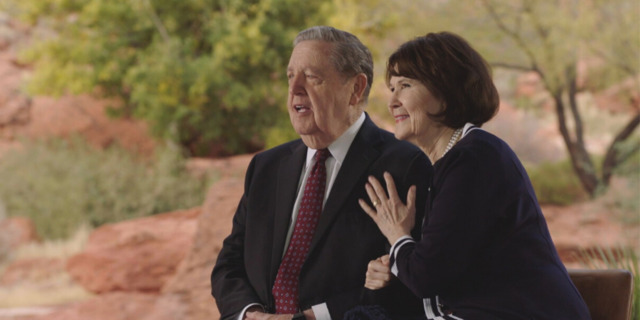 RootsTech Family Discovery Day has looked very similar for years—thousands of eyes on the massive stage at the Salt Palace, a beloved Church leader or leaders sharing an inspiring message, and a broadcast enabling those not in attendance physically to experience a taste of connection.

But in 2021, Family Discovery Day looked different. The in-person audience for Elder Jeffrey R. Holland’s and Sister Patricia Holland’s remarks was small. But the members of that audience included those who are most important to the Hollands—their own children.

The backdrop of Family Discovery Day is southern Utah, and through video, photographs, and a tour around St. George, we see places and hear memories that shaped the family.

As I watched Family Discovery Day virtually and observed the Holland family together, my mind kept thinking about a teaching found in the Bible Dictionary: “Only the home can compare with the temple with sacredness.” It really felt as though the Holland family invited us into their sacred home life, sharing the moments and places that shaped their family while giving us all an opportunity to realize our place in the family of God.

Here are five of my favorite moments from this year’s Family Discovery Day.

1. The Ability to Influence Generations

Sister Holland shares a precious story of her great-grandmother, Bertha Smoots Barlocker. Her family line was used to green, lush landscapes in Switzerland—a very different site from what they found when they arrived in Enterprise, Utah. So Bertha decided to do something to bring a bit more green to the area. She planted a row of fir trees around the church meetinghouse and would carry buckets of water to water the trees by hand each day.

“My mother, who was then just a little girl, often walked with her grandmother on that daily journey,” Sister Holland recalls. “One day, a well-meaning neighbor said to my great-grandmother, ‘Bertha, why do you waste your time carrying water to those trees? They will never amount to anything. Certainly, you will never live to see them grow at all.’ My grandmother turned on this neighbor, and with all 5 feet of her height said, ‘Maybe I won’t live to see them grow at all, but this little girl will.’ And she pointed to my mother. Well, my mother did see them grow, and so did I.”

Sister Holland shares that she went to church, played with her friends, and had family picnics under the shade of those beautiful trees her great-grandmother had planted. Now, her children and her grandchildren have done the same.

“Whether it is trees to remind us of our native land, or stories that tell us of our ancestors, or photos that show us how things were when we were young, these are all ways we tie ourselves to our heritage, ways we bind ourselves to those who must not be forgotten,” Sister Holland says.

After sharing a glimpse of life in Enterprise, Utah, the video takes viewers 35 miles south to St. George, where Elder and Sister Holland are in the car with their three adult children: Matthew, Mary Alice, and David. We experience a special tour of St. George with places important to the Holland family, including the home Sister Holland moved to as a teenager, the home where Elder Holland spent all of his youth, Dixie Academy where the two first met, and the place where they were sealed, the St. George Utah Temple. 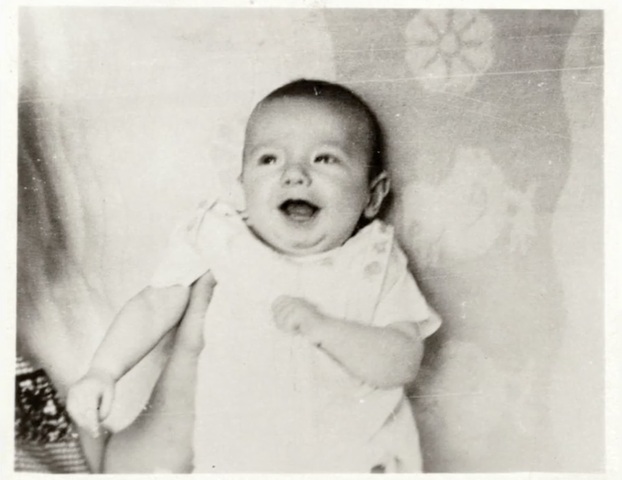 “One of the great, great, great blessings of the gospel is I have every confidence, every assurance—couldn’t be more sure of anything in the world—that I will know him again. I am confident that we’ll all have ‘get acquainted time’ with those we’ve lost,” Elder Holland says.

We later reunite with Elder and Sister Holland’s family at Thomas Judd’s Store Co. across the street from Dixie Academy where Elder Holland shares an important lesson with his posterity:

► You may also like: Elder Holland addresses fear of the future in new message

3. Focusing on “The Most Important People We Know”

If I were to describe my favorite part of the Family Discovery Day broadcast without any details of the conversation, it might seem like a simple setting. Two parents and three children sit down at a table to reminisce about memories. But it’s the context of those memories and the sacred location they have their conversation in that makes the conversation so impactful.

Each of the children share stories of memories of their childhood. Daughter Mary Alice shares how her parents often had important and special people over for dinner. One night, the Holland children got into the car with their dad to go pick up some dinner guests. They drove around for a bit and then returned home where their dad told them, “You are our most special people. You are the most important people that we know.” 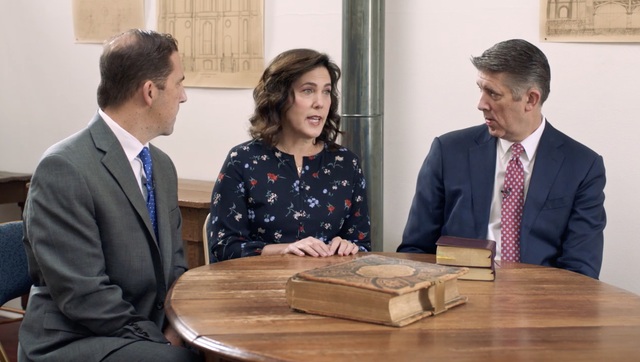 “That kind of love and identity builds a security, I think, in a child that can’t be matched,” Mary Alice says. “That’s something I know I’ve always tried to pass on to my children and make sure they know that they’re my most important people and they’re my best friends and there’s no one I’d rather be with on this earth than them.”

David shares a story of a time he and his father were driving down I-15 in Utah and his father asked him to read them a scripture. He reached for the blue soft-cover edition of the Book of Mormon they kept in the car and serendipitously opened to Enos 1:12, a scripture about how God answers prayers because of faith. David says he could tell that scripture was an answer to prayer for both him and his father.

“We were functioning at such different levels,” David says, speaking to his father. “I mean, you were worried about global things, eternal things. I was trying to make a sophomore football team. But to our Heavenly Father, those prayers were of equal weight. He cared about both of us at that place where we were.”

Matt shares an experience with his mother from when he was a teenager. The family had just relocated to Provo and Matt felt his academic, social, and athletic dreams were falling apart. His mom came in before he went to bed and shared a scripture with him in Matthew 6:33 about seeking first the kingdom of God. The scripture resonated with Matt, and he said it was a turning point in his life as he decided to first seek after God.

It was a simple setting—a family of five surrounding a table. But as a fly on the wall observing the conversation, I think that simplicity was one of those moments that showed how “home can be a heaven on earth” (Hymn 298).

► You may also like: This national comic strip recently featured timeless advice from Elder Holland

4. Our Spot in the Family

For some, the idea of having their family sit around a table and lovingly share memories of the past may seem like an impractical fairy tale. But as Elder Holland says, no family, including his own, is perfect.

“We know there are many of you who for whatever reason struggle with the idea of what is often termed the traditional family, or the perfect family,” Elder Holland says. “Perhaps abuse has darkened the brightness of what might have been a celestial home. Perhaps divorce has left you on your own, searching for answers about the past and protection for the future. Perhaps you’re prayerfully and patiently still waiting for the blessing of being united to your own eternal companion or having children you cannot yet bear. For our faithful LGBT friends, perhaps your heart and mind are struggling to find hope and peace, your place in the eternal picture. Please, all of you, know this: we see all of you and we love all of you.” 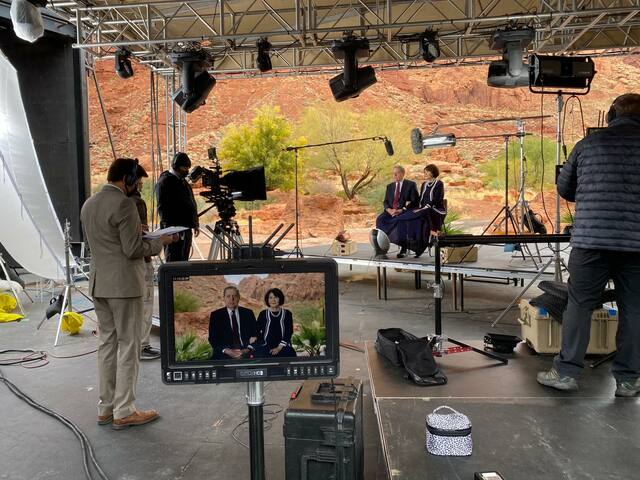 Elder Holland recognizes those who may not have what most would term the traditional family for a myriad of reasons. And then the promise he offers is truly magnificent:

He suggested that instead of thinking about the traditional family, we could replace that phrase with “eternal family.”

“With an eternal perspective comes understanding that we are all part of one big family—the family of God,” Elder Holland says. “That is why we call each other brother and sister. Imagine a world where people understood our true family tie to one another. What civility would we cultivate? What division would we avoid? What love would we let warm our devotion and divine connection to one another?”

5. The Most Important Connection We Can Develop

Toward the end of the presentation, we accompany Elder Holland to the St. George Tabernacle. This pioneer building is where Elder Holland attended church for the first 12 years of his life. He shares that it’s where he was blessed as a baby, where his father interviewed him for the Aaronic Priesthood, where he passed the sacrament for the first time, and where he reported on his mission to England. 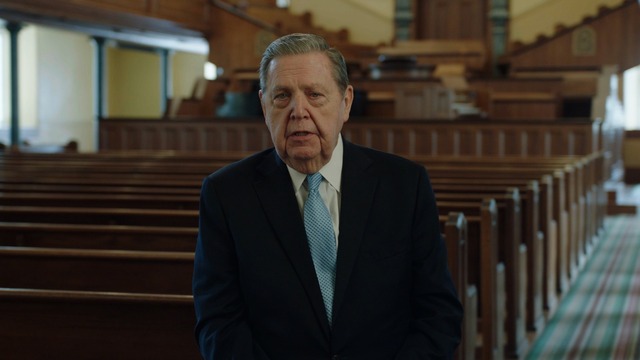 Elder Holland explains that it was in the tabernacle that his understanding of his irrefutable tie to God began to grow in his young heart. He offers a promise for what will happen when we build our own connection to God.

“I’ve learned over the years since then that when you attend to that connection to God first, all other connections fall into place. Then, and really only then, you find your true place and your eternal belonging. Here’s another promise to you. I promise that the closer you get to God the more you will want to be with Him and to be like Him.”

Elder and Sister Holland’s 48-minute address is available now at Broadcasts.ChurchofJesusChrist.org. Through the address, I think you will feel a special connection to not only the Holland family, but to the eternal family of God.

Connection is one of the goals of RootsTech—a goal that was achieved in record numbers this year. More than 1 million people participated from over 235 countries, according to Newsroom.  At the close of the conference, FamilySearch CEO Steve Rockwood said, “There’s a reason why we said this is ‘RootsTech Connect.’ ‘Connect’ was the main message and it is the main driver. We already see it in social media, but now you see it that they want not just quantity, they want quality. And that’s what RootsTech provides, is quality, deep, abiding, meaningful connection.”

More than 1,000 RootsTech breakout sessions are available for free online for the next year. If you’re not sure where to start, you can read some summaries of the keynote speakers remarks at Church News and Deseret News. You can also find a summary of the Temple and Family History Leadership instruction session with Elders David A. Bednar, Gary E. Stevenson, and Dale G. Renlund at Church News.