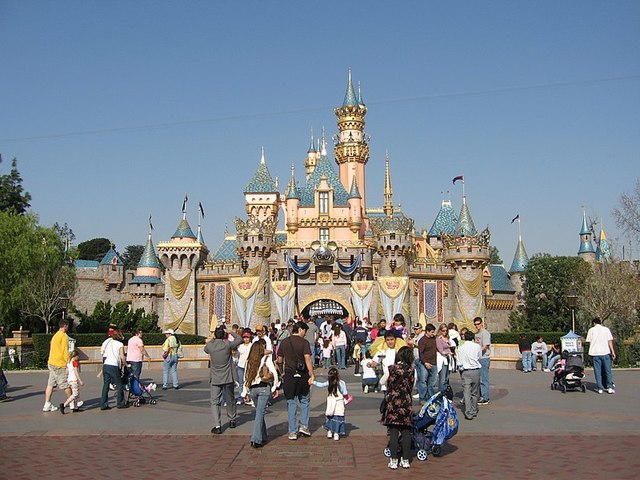 6 Church Sites to Visit on Your Disneyland Trip This Summer

Last fall, my wife and I took our three kids on our first official family Disneyland trip. It was magical. It was memorable. It was everything we wished it could be.

But I have to admit: on the Sunday we found ourselves there (between the San Diego Zoo and our three days in Disneyland), I wish I had done a bit more research to find more spiritually enlightening activities. Sure, we went to church that morning, but I should have planned better. Because while Disneyland is a great family vacation, this summer you might be looking to make some other meaningful memories on the side too.

In an effort to combine the magical with the spiritual, why not choose to add a few days to your California vacation and take some Church-centered detours? The Church of Jesus Christ of Latter-day Saints has a rich history in the Golden State. Additionally, some of the important sites that helped Christianity and the restored gospel spread through the American west are well worth a visit. So as you plan your Disneyland trip for this summer, here are just a few gospel-focused sites you might want to stop at: 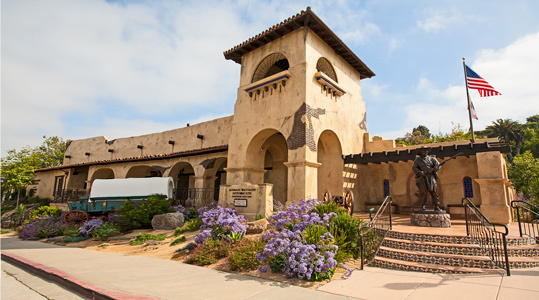 First on our list is the official Mormon Battalion Historical Site.

The Mormon Battalion is something we discuss quite often in our culture, but because they went pretty far off of the literal beaten pioneer path, we don’t always get to see physical reminders of what they did.

As a reminder, part way through the pioneer’s exodus west, the Saints were in a pretty precarious financial position. They petitioned the government for help and were told they’d be given payment in exchange for 500 volunteers joining the army to help win the Spanish-American war.

The Mormon Battalion Historical Site is run by The Church of Jesus Christ of Latter-Day Saints, so you can expect to run into friendly missionaries and get an in-depth look at the history of the Battalion.

And don’t worry—it’s got lots of kid-friendly activities, like panning for gold and brick-making demonstrations. If your kids are anything like mine, they’ll love the fact that the 45-minute tour has lots of included videos. (Screen time, am I right?)

The site is free to visit. It’s a bit of a drive from Disneyland, but if you’re planning a beach day in San Diego, it’s right on the way! 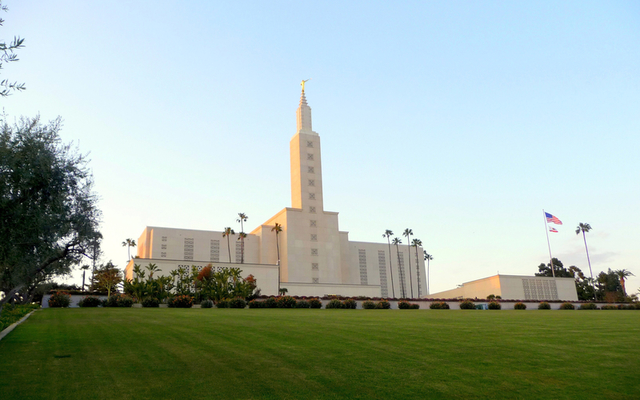 Many people don’t know that the Los Angeles California Temple is actually one of the oldest (and largest!) temples of The Church of Jesus Christ of Latter-day Saints. It was the 10th operating temple and has been in use since 1956.

One fun fact to tell your kids: the LA Temple was the first temple after the Salt Lake Temple to feature the 15-foot statue of the angel Moroni on top of its steeple.

If you have teenagers with temple recommends, you could head in to do baptisms for the dead. But be aware that this particular temple encourages you to make an appointment ahead of time for the baptistry, and you may need to bring enough priesthood holders with you to perform the ordinances.

With smaller children, this temple is still a great stop! It includes a large visitors' center where they can learn more about Christ, the history of our church, and the purpose of the temple.

If that’s not enough, there’s a family history library onsite, and the temple sits on 13 acres of land. You can imagine the beautiful gardens, fountains, and walkways to explore, but if you’ve got grumpy kids, you might note as a selling point that there’s a baseball diamond right on the grounds where they can get some wiggles out too.

As a last-ditch effort, if the baseball diamond doesn’t impress, you can also mention that the Los Angeles Temple is briefly seen in one of the 1966 Batman movie.

There are several other temples in Southern California (San Diego and Newport Beach are both popular), but LA has so much history to go along with it that it seems like the natural one to visit. 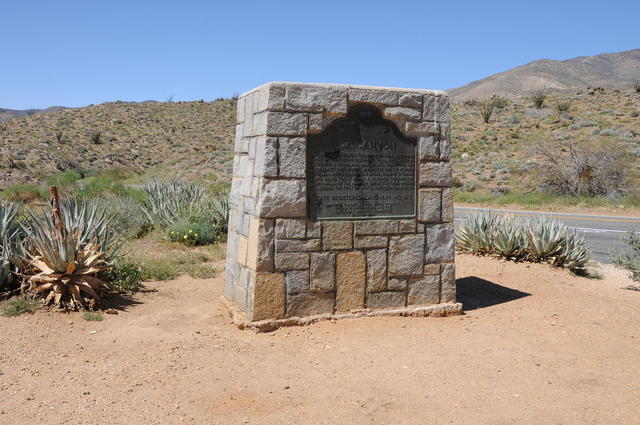 If the great outdoors is more your style, you can show your family part of the actual route the Mormon Battalion took into California.

When they hit Box Canyon, they couldn’t quite squeeze their wagons with all of their equipment through. Instead of taking a long and tedious trail around, they used the hand tools they had with them to carve their way through the canyon. You can still see the marks from those tools today.

There’s a historical marker for the perfect photo-op, with the widened trail a short, easy walk—down into the canyon—totally doable with kids. If you’re feeling adventurous, there’s a 6-mile round-trip hike you can take up to the old Felden Mine site.

The canyon is part of Anza Borrego State Park, so you’ll need a state parks pass ($5/day) to park at the trailhead.

Box Canyon is located much farther inland than some of these other sites. If you do visit the Mormon Battalion Site, Box Canyon could be reached on your way back to the Utah area if that’s where you’re headed. 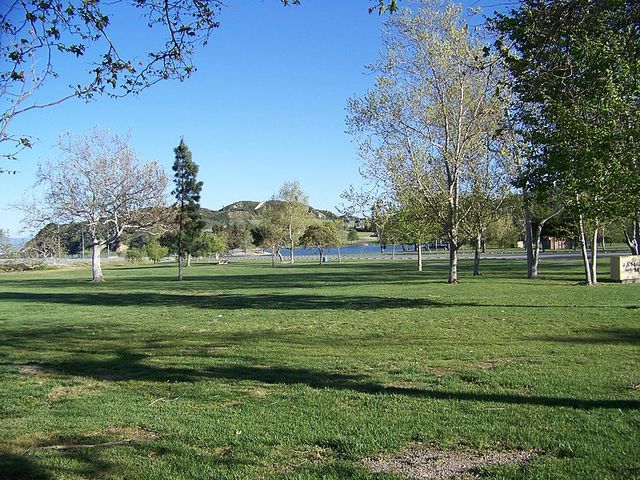 photo by Johnwayne Stroud from Wikipedia (no changes made)

Just an hour drive from Disneyland gets you to the city of San Bernardino—which wasn’t much more than a Spanish outpost until the valley was colonized by members of the Church in 1851.

There’s a lot of Church history associated with this city, and although you may not find many physical remains of that history, there are some stops you can make.

When the Saints first arrived in San Bernardino, they expected to occupy land that had been previously arranged for them to purchase by members of the Mormon Battalion. Unfortunately, the rancher changed his mind and declined to sell to the colonists once they got there. So, they did what many pioneers did in those days—they camped.

You can actually camp in the same general area the pioneers did at Glen Helen Regional Park. From there, you might explore the city and some of the pioneer landmarks that still exist.

The San Bernardino Courthouse sits on the same spot that housed the original adobe “Council House” built by the pioneers and used as a meetinghouse for many years. The City of San Bernardino was incorporated in the old Council House.

Now called “Pioneer Park” is the site of the original public park purchased and set aside by the early Saints for large gatherings. The park has changed significantly over the years, and no historical structures remain, but the land remains a public park.

But the coolest Latter-day Saint artifact in San Bernardino actually comes from a different phase of history.

During the Great Depression, the first Latter-day Saint chapel was built—back in the days when members pooled their money and paid for their own meetinghouses. They wanted their building to be beautiful, so they got together and commissioned a series of pretty amazing stained glass windows.

A large window depicting Joseph Smith’s First Vision and 12 smaller windows were installed at that building and proudly displayed for years. Later the building was sold. It took some time, but all 13 windows were eventually purchased back privately by members of the Church and restored.

If you want to see them for yourself, the larger window is permanently installed in the foyer of the Redlands California Temple. And hey, if you’re looking for a sacrament meeting to attend, the chapel in Highlands, California, contains two of the smaller windows, so you can see some history and make it to your Sunday meetings in one trip. 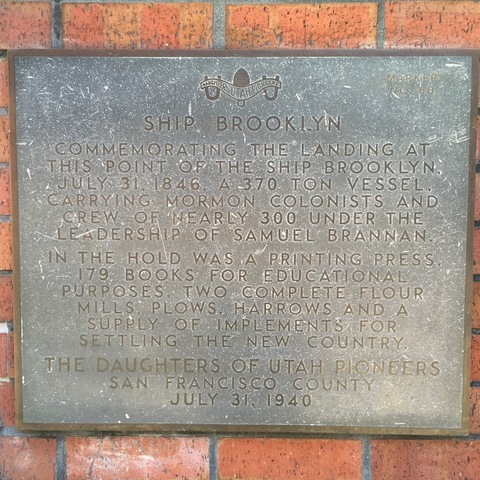 If you happen to be headed north, San Francisco is a no-brainer stop.

Remember the Saints that took the long way around when they moved west— going through New York Harbor and sailing around South America to California? If not, it’s been too long since you read The Work and The Glory series. These ships landed right in San Francisco Bay.

Many of those first pioneers stayed on to help build what is now San Francisco from the ground up. You can take a simple walking tour of the old city (contact the California Pioneer Heritage Foundation for information) that includes several Church sites, such as:

If you’re in a car, you might also consider driving a few minutes to the former home of Joseph Smith’s niece, the poet Ina Coolbirth. The Oakland California Temple is also nearby.

A four-hour drive from Disneyland, Old Las Vegas Mormon Fort Historical Park is worth the detour. The fort was the first permanent non-native structure in what is now Las Vegas, and it was built entirely by missionaries. (Talk about inspiration for your teenagers!)

This fort was designed to protect Latter-day Saint settlers as they established early colonies between Salt Lake City and Los Angeles. The remains of the fort became a state park in 1991, and the site was renovated and turned into a modern museum in 2005.

This site is not owned or operated by the Church, although there is a plaque constructed by the Church outside the park. Nonetheless, the museum contains some artifacts and information about the early pioneer settlers. The museum is family-friendly with crafts for children, and it only costs $3 for adults to get in. Kids 12 and under are free.

BONUS: The San Gabriel Mission: the Spread of Christianity Throughout the United States 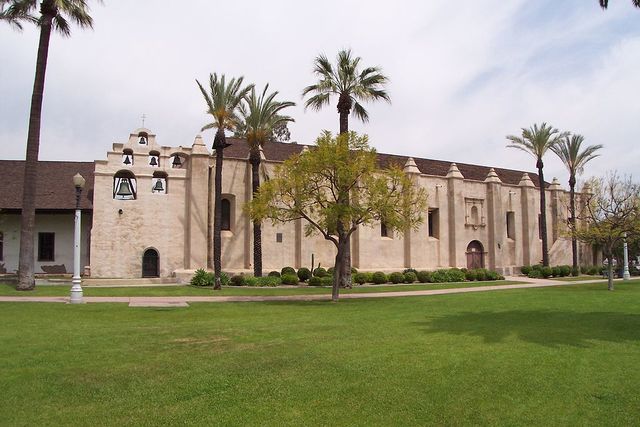 photo by Robert A. Estremo from Wikipedia (no changes made)

Mission San Gabriel Arcángel is not part of the Latter-day Saints' journey, specifically, but it is a beautiful building and a historic monument to the spread of Christianity in the United States. Some of the best spiritual conversations we can have with our children include exploring other religious cultures.

The San Gabriel Mission is one of 21 Spanish missions in the state of California. Any of them would make a great stop, but this one happens to be only 30 miles from Anaheim.

Built in 1771, it is one of the oldest California missions, although floods and earthquakes have caused the building to be moved and rebuilt several times. The mission is open to the public ($5 admission fee for adults, $3 for youth, kids 5 and under are free) and includes an on-site museum with religious and historical artifacts.

If you go, make sure you check out the Stations of the Cross paintings in the museum—they are original Native American works of art. Your kids might be interested to know that the dyes for these paintings were made from crushed plants.

Some Final Thoughts and Advice

With so much rich Church history surrounding Disneyland, there’s little excuse not to stop by at least one of these culturally and spiritually uplifting sites this summer.

A quick tip: Disney, with all of its flashy characters and constant stream of fun, may be a hard act to follow. So, while you’re planning your trip, be sure to include your kids in the planning. Some brief Church history lessons can help get them excited about the possibility of seeing where the soldiers in the Mormon Battalion walked, the temple visitors' center, or an old adobe fort.

With a bit of planning and some well-thought-out conversations, these windows into the history of our church can be the perfect opportunity to introduce even small children to the strong sense of community we enjoy, and to the high price that was paid for us to worship as we please.

Preston Lee is a full-time blogger who recently fell in love with Disneyland all over again last year. When he’s not working to help freelancers excel at business, he’s wishing he was riding Pirates of the Caribbean or Splash Mountain with his adventurous kids.