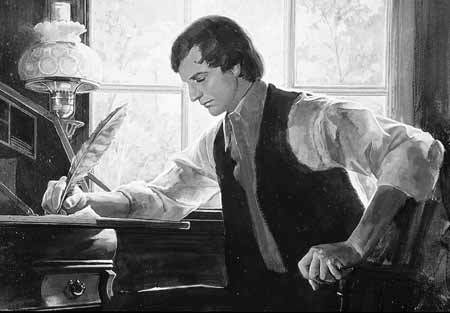 7 Important Things You Should Study in Addition to the Scriptures

Not too long ago, there was an apostle by the name of Bruce R. McConkie who gave us some of the most doctrinally rich sermons we have in the Church. Some of you might remember him!

He was known for his thorough research, dry humor, and bold style of speaking. While his primary focus was always the scriptures, he had a little advice for us when choosing other "works" to study in our quest to improve our gospel understanding. Here are McConkie’s five suggestions of the most important things that we should study (other than the scriptures), plus two additions of my own.

Joseph Smith wrote a letter “at the request of Mr. John Wentworth, Editor and Proprietor of the Chicago Democrat" wherein he said, "I have written the following sketch of the rise, progress, persecution, and faith of the Latter-day Saints."

This letter gives members and investigators a concise yet comprehensible look at the beginnings of Mormonism. It concludes with what was called the "13 declarations of Church doctrine," which has become known as the 13 Articles of Faith. The Articles of Faith are the most basic and essential building blocks of our doctrine. Sometimes I believe that the articles of faith are overlooked because of their brevity and simplicity, but the doctrine that is embedded into each and every one of those articles of faith will show the depth of the doctrines of Mormonism.

James E. Talmage wrote an entire book on the articles of faith, and it happens to be one of the best books that I've ever read. Those articles of faith were not just sporadically dropped on a page. They were inspired to clearly set forth the beliefs that made up the long-expected restoration.

The Lectures on Faith

The Lectures on Faith were compiled during the time of Joseph Smith and were taught by the prophet and others during the early days of the Church. These lectures are some of the best explanations on faith I've ever heard. They help us understand faith for what it really is. They teach us that faith is a principle of power and a principle of action. They teach us that faith is the driving force behind everything that we do. In effect, faith is works.

The Father and the Son: A Doctrinal Exposition by the First Presidency and Quorum of the Twelve Apostles

One of the very first things lost from the earth during the great apostasy was an understanding of the nature and character of God. If Satan could accomplish one thing, he would find a way to keep us from knowing who our Heavenly Father is and what His relationship is with His son Jesus Christ.

By learning about who and what God is, we are able to worship Him and emulate Him so that we can become like Him. If we are unable to become like Him, then there is no purpose to our existence. Becoming like God is the very foundation of the plan of salvation, and everything else that has taken place throughout the history of our world including the Atonement was for that express purpose.

The first presidency felt that it was so important that we understood this relationship that they published this document to the entire church. The Bible and the Book of Mormon contain some verses of scripture that make it hard for the reader to understand who is actually talking. Is it the Father, the Son, the Holy Ghost, or an angel that is speaking in the name of God?

Within this document, we are taught about divine investiture of authority. We are taught that sometimes the Son is given the very words that the Father would speak, and He speaks them as if He was the Father. When Christ speaks as if He was the Father, many Christian religions believe this confirms their belief in a Trinitarian creed. This document was set forth to explain and expound upon the oneness that exists between the Father and Son, as well as our oneness with them.

The King Follet Discourse and The Sermon in the Grove

The King Follet Discourse and the Sermon in the Grove are two of my favorite things to study. The prophet Joseph Smith gave these addresses in his final hours. In these discourses, you'll learn about the character of God, the deification of men and women, a plurality of gods, the correct translations of the Bible, and how the earth was actually created. He dispels a lot of long-held Christian traditions and superstitions. A careful study of these talks will not leave you disappointed.

To purchase a copy of the King Follet Discourse, check out this ebook from deseretbook.com.

This official statement by the first presidency was built to combat the theories of Darwin. It states that God created humans and that we're not just distant relatives to the ape or chimpanzee. Atheism has picked up steam as of late and the modern day Korihor's are running rampant in the colleges of America and throughout the world, making this document vital in our time. This statement also gives us a clear understanding of the pre-existence.

Now, I'm no McConkie, but I hope he won't be too offended if I add to his list. Unfortunately, he didn't live to see the release of what I consider two of the most important "proclamations" that the Church has ever released, so I’d like to expand his list of five with two additions:

The Family: A Proclamation to the World

There may not be a more appropriate time for this proclamation to come out. If the family falls under the attacks of Satan, then we're in some big trouble. With massive gender confusion and family unit disintegration, the Church makes it crystal clear what the Lord expects of the  family reminding us that the family is central to the whole reason we came down here in the first place.

To own your own, beautifully framed family copy, check out deseretbook.com.

Last but not least, I would choose to add "The Living Christ" to this list. Christ is everything to us, yet few people realize that Mormons believe in Christ. It brings our mind to the testimony that was given of Christ in the Doctrine and Covenants when Joseph Smith and Sidney Rigdon said,

And now, after the many testimonies which have been given of him, this is the testimony, last of all, which we give of him: That he lives! For we saw him, even on the right hand of God; and we heard the voice bearing record that he is the Only Begotten of the Father—That by him, and through him, and of him, the worlds are and were created, and the inhabitants thereof are begotten sons and daughters unto God. (D&C 76: 22-24)

Check out deseretbook.com to purchase your own framed copy of "The Living Christ," included with a frame and inspiring illustration of the Resurrected Savior.