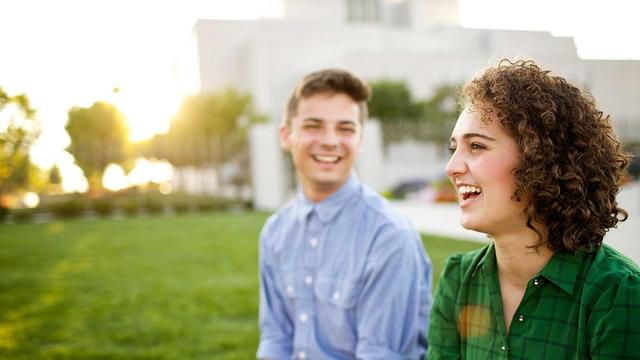 8 Incredible Stories of First-Time Visits to the Temple

The following comments have been edited for length and clarity.

Our first trip to the Lord’s house is always a special experience. And regardless of our age, if we are 12 and performing baptisms for the dead or are much older than that, we often remember our first temple trip for the rest of our lives.

1. I was two years old when I was adopted in 1956 from an orphanage in Germany. My new parents, me and a baby sister that they also adopted in Germany were sealed in the Switzerland Temple for all time and eternity!
—Nancy Jane Fox

2. I was six when I went to the temple with my family and my brother Dane Bounds. I thought we had all died and gone to heaven. I remember it very well.
—Julie Bounds

3. I was four years old. Finally, after 14-plus years since my dad was baptized, a way was made that my parents could take their six children to Salt Lake City to be sealed. [Here was] Heavenly Father’s miracle that allowed this to happen: My dad was called to serve as a counselor in the bishopric, and he was asked to represent our ward at general conference in April 1965. Instead of using the money to fly out himself, he got free rail passes (he worked for the Union Pacific) and used the voucher from the church for food . . .  and took us to be sealed. Many years later, this miracle was confirmed by a prophet of God, Gordon B. Hinckley, who told me face-to-face that my dad had been called into the bishopric at that time because the brethren knew he would never be able to afford to take his family to the temple. How grateful I am for God’s tender mercies!
—Amy Ogden

4. I think I was 21. My best friend was getting married, and while I was waiting for them to be sealed, I was asked to fill in for baptisms. Even though I was her maid of honor, I was thrilled to be asked. [I] had to re-do my hair and makeup later, but who cares!
—Karen Knoeb

5. [I was] nineteen. I went to the Salt Lake Temple along with 200 other missionaries before we left on our missions! We then went up to the solemn assembly room and were able to ask any question we had to President Nathan [Eldon] Tanner of the First Presidency. I remember that the most!
— Joe Thompson

6. I was four. My parents were converts, and we drove to Salt Lake City from Pittsburgh, PA, to get sealed in the temple. A few months later, after I turned five, my dad got a job as the custodial foreman at the soon-to-be-dedicated Washington D.C. Temple. He took me and my sisters through the temple the night before the dedication. We even sat in the prophet's chair in the solemn assembly room. I have amazing memories of the temple and an incredible testimony of its sanctity, in part because of those childhood memories.
—Stacy Tregaskes Gooden

7. [I was] 11 years old. My parents were converted right before I was born. My family traveled from Lincoln, NE, out to [the] Salt Lake Temple and were sealed. It was amazing, [and] I couldn't talk at all and had overwhelming tears flowing down my face.
— Penney Tripp

8. At 19, I flew to Salt Lake City to begin my missionary service in Finland. My father had recently become active in the Church. My mother had been baptized the night before I left for my mission. I was completely unprepared for obtaining my own temple blessings. After a four-hour session in the Salt Lake Temple, I never wanted to return. Blessedly, I did and came to love the temple. At the end of my two years as a missionary, I flew to Salt Lake City to meet my parents and three sisters, where we were sealed in the temple. It was a nice way to end my full-time missionary service.
—Dane Bounds

Mormon Life TempleTemple,Mormon Life
Comments and feedback can be sent to feedback@ldsliving.com