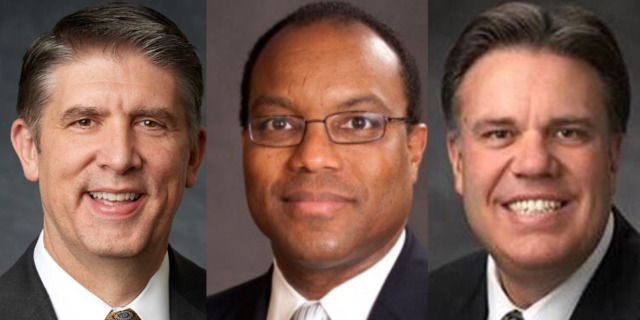 We celebrate and sustain each of these 70 brethren in their new important callings and are grateful for each of their service. Here are just eight of the names that may have rung a bell as you heard them announced over the pulpit.

Those in Utah business might recognize Brother Steven J. Lund’s name for his work with Nu Skin. He currently serves as the executive chairman of the board and is an early co-founder. He is also on the board of regents for the Utah System of Higher Education. According to Newsroom,  Brother Lund and his wife, Kalleen, are the parents of four children and nine grandchildren.

Latter-day Saints on the East Coast may recognize Brother Corbitt’s name. He currently works for the Church’s Missionary Department. Previous service includes director of the Church’s New York Office of Public and International Affairs and mission president in the Dominican Republic Santo Domingo Mission. In 2014, he received the 2014 Norman Vincent Peale Award for Positive Thinking. In 2008, Brother Corbitt spoke at a Church event celebrating the 30th anniversary of the revelation of the priesthood. According to Newsroom, he and his wife, Jayne, have 6 children and 11 grandchildren.

If you follow LDS Living, chances are you know Brother Bradley R. Wilcox, also known as Brother Brad Wilcox. Brother Wilcox’s 2011 BYU devotional address, “His Grace Is Sufficient,” has over 700,000 views on YouTube. He’s the author of several books, including his latest, Because of Christ on Calvary and is a popular Time Out for Women speaker. According to Newsroom, he and his wife, Deborah Gunnell, are parents of four children and eight grandchildren.

Elder Richard I. Heaton currently serves as the managing director of the Priesthood and Family Department of the Church. According to Newsroom, he and his wife, Valerie, have nine children.

The Huntsman name is familiar to many in Utah, and Elder David H. Huntsman is the president/chief operating officer of the Huntsman Foundation. According to Newsroom, he and his wife, Michelle, have eight children.

Those in Texas will likely recognize the face of Elder Arthur Rascon. He’s an Emmy-award winning reporter covering both local and international news for ABC. According to Newsroom, he and his wife, Patti, have seven children.