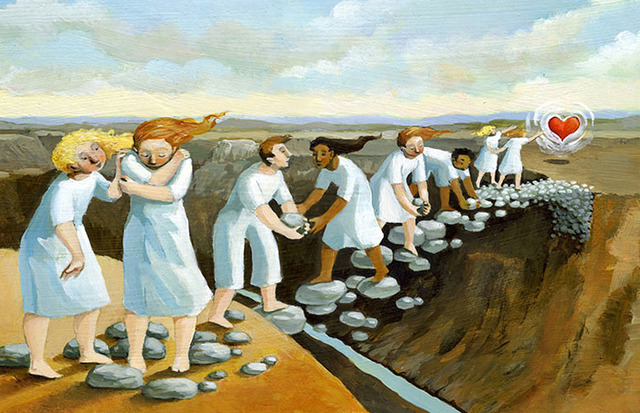 A Bridge to Hope and Healing: What We Need to Understand About Healing from Sexual Abuse

Imagine you are standing at the edge of a cliff and want to get to the other side of a deep canyon, where you have been told that great happiness awaits you. As you search for a way to cross, you find a pile of supplies that, if put together correctly, will build a bridge to cross the canyon.

If you don’t know how to build the bridge, the supplies will be useless and you will feel frustrated and hopeless. But if you get help from someone who has experience in building bridges, your knowledge and understanding can increase and together the task can be accomplished.

Over the past 18 years, my job has been to provide tools and guidance to help people cross the gulf of emotional or mental suffering. Of all the people I have counseled, no other clients seem to come so wounded as those who have been victims of sexual abuse. I have seen the impact that this challenge has on the individual’s ability to endure well to the end.

However, I have also come to know that lasting relief from our struggles and suffering is possible through our Savior. His love lifts people out of darkness into light.

Why Does Sexual Abuse Cause Such Harm?

Victims of abuse tell me of a life full of depression, self-doubt, and other deep emotional pains. President Gordon B. Hinckley (1910–2008) helped us understand why sexual abuse causes such deep hurt:

“There is the terrible, vicious practice of sexual abuse. It is beyond understanding. It is an affront to the decency that ought to exist in every man and woman. It is a violation of that which is sacred and divine.It is destructive in the lives of children. It is reprehensible and worthy of the most severe condemnation.

“Shame on any man or woman who would sexually abuse a child. In doing so, the abuser not only does the most serious kind of injury. He or she also stands condemned before the Lord.”

The power of procreation is a sacred and divine power our Father in Heaven has given to His children. Elder David A. Bednar of the Quorum of the Twelve Apostles taught: “The power of procreation is spiritually significant. … Our Heavenly Father and His Beloved Son are creators and have entrusted each of us with a portion of Their creative power.” It’s no wonder, then, that violation of this sacred power is “worthy of the most severe condemnation” and causes the “most serious kind of injury.” Sexual abuse is any non-consensual interaction that involves touching or non-touching behaviors in which a person is used for the sexual gratification of another person. Far too often, victims of sexual abuse are left with confused thinking as well as feelings of unworthiness and shame that can be almost too heavy to bear. The pain and suffering victims experience is often intensified by others’ comments rooted in a misunderstanding of sexual abuse and its effects.

Some victims are accused of lying or are told that the abuse was somehow their fault. Others are mistakenly led to believe that they must repent, as if they had somehow sinned by being victimized.

Many clients I have worked with who experienced sexual abuse in their childhood or youth are told to “get over it,” “leave it in the past,” or “just forgive and forget.” These types of statements—especially when coming from close friends, family members, or Church leaders—can lead the victim to increased secrecy and shame rather than healing and peace. Similar to a serious physical wound or infection, these emotional wounds do not just go away if ignored.

Mormon Life Abuse HealingAbuse,Healing,Mormon Life
Comments and feedback can be sent to feedback@ldsliving.com