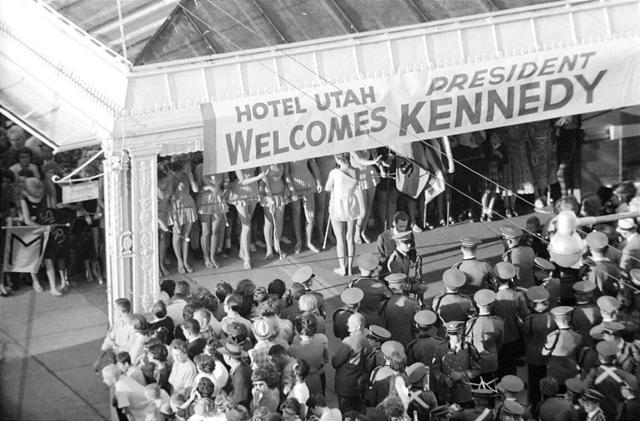 A Controversial Bar, Famous Guests + More Things You Didn't Know About the History of the Joseph Smith Memorial Building

The Joseph Smith Memorial Building is home to The Roof Restaurant, FamilySearch Center, and beloved Legacy Theater, but before its days as a memorial building, it used to be a world-class hotel. Live music, fine dining, lavish ballrooms—maybe even a sighting of Elton John, Katharine Hepburn, or John F. Kennedy—were all part of the Hotel Utah, where there were no limits on splendor. 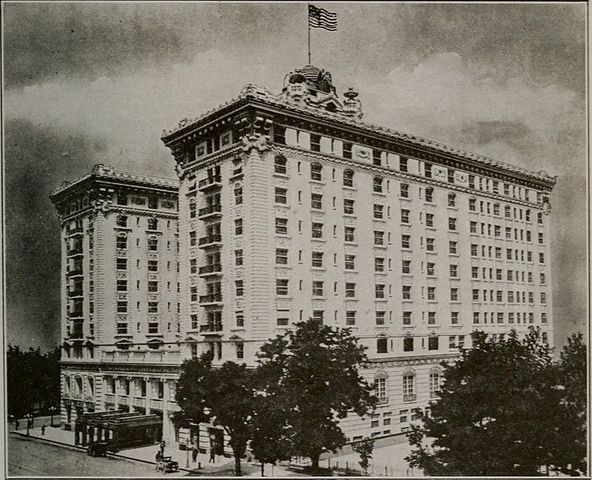 Built in 1911, Hotel Utah was a testament to the collaborative effort between Church leaders and business owners of multiple faiths. They knew that the key to encouraging visitors to come to Utah was to provide a fine hotel, and therefore spared no cost in constructing the $2 million (about $48 million in today's money) building. In a prime location at the corner of South Temple and Main Street, the hotel was conveniently just down the street from Temple Square and the growing downtown area.

The hotel made a splash at its opening ceremony, with only 500 of Utah's most notables invited to attend, according to uen.org. Hotel Monthly called it "a noble white palace," and President Joseph F. Smith said in his closing remarks during the October 1911 general conference, "[The hotel] is one of the most magnificent hotels that exists on the continent of America, or the old continent either. I am told that it is equal to any in the world."

The hotel staff always strove to maintain their first-class rating and service to the extent that they even washed their coins in a cleaning solution to make them brighter and exchanged their cash with the bank every day for crisp dollar bills. It was the state's own "Grande Dame of Hotels."

Surviving War and the Great Depression

Even war didn't stop Utah's impressive hotel from delivering the best to its customers. When WWI hit not many years after the hotel opened for business and caused a 50 percent drop in occupancy, the hotel also dropped its prices as much as it possibly could while still delivering quality. It pulled through, and 100 guest rooms were added in 1918.

And during the Great Depression, the Utah Hotel stayed afloat by cutting rates from $3.50 to $2.50 for single rooms and $5.00 to $3.50 for doubles. The price cuts paid off, and as the economy began to improve, so did the hotel. The Empire Room was renovated to make more room for dinner and dancing to big band music and the roof of the building became a popular, romantic open-air dining destination known as the Starlite Gardens. In fact, today, the modern replacement for the old dining spot, the Garden Restaurant, still has a retractable glass ceiling, reminiscent of the high-class atmosphere of Hotel Utah and nights spent dining under the stars. 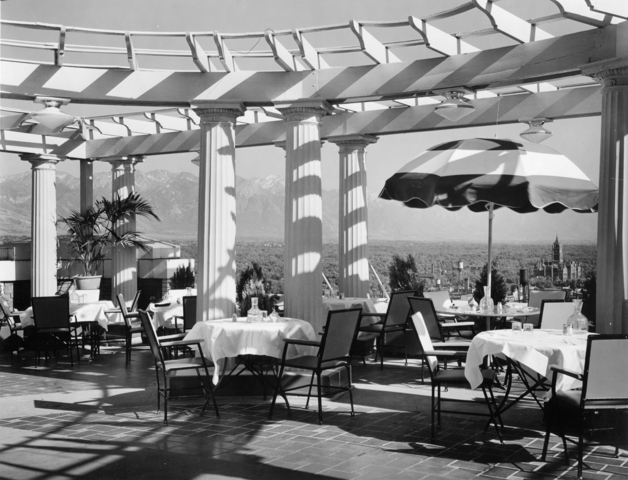 As WWII began, the hotel was booming with business. Military personnel often rented rooms while they conducted business in Salt Lake City, and despite nationwide food rations, the hotel promised they wouldn't skimp on their food quality. They did, however, request, "Don't order more than you can eat—then eat all you order."

Just a year after it opened, the hotel hosted its first United States president: William Howard Taft. He stayed in the luxurious presidential suite for $6 a night and, according to a record from the time, was served for breakfast cantaloupe, sliced peaches, broiled sirloin steak, bacon, and eggs, potatoes mashed in cream, crescents, toast, and rolls and coffee for a whopping $2.15. 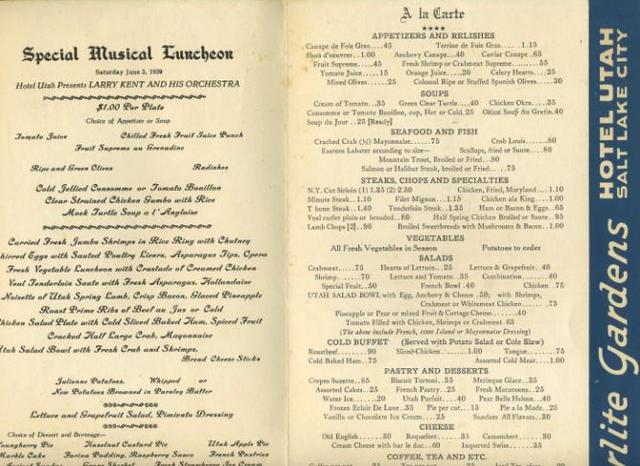 Taft noted that the hotel was up to par "with any in the world," according to and LDS Church News Archive article. His stay began a long tradition of every president visiting the hotel until Ronald Reagan, who was the last president to stay there before it closed in 1987.

Throughout the 1960s and 1970s, the hotel hosted a slew of other famous customers including John F. Kennedy, Jimmy Stewart, Lowell Thomas, Katharine Hepburn, Henry Fonda, Ella Fitzgerald, Van Cliburn, Helen Hayes, Harrison Salisbury, Liberace, Warren Burger, John Glenn, and George Harrison. Church Presidents Spencer W. Kimball and David O. McKay even lived in their own suites in the hotel for a time, and J. Willard Marriott, entrepreneur and future founder of the well-known Marriott hotel chain, often stayed in the Hotel Utah as a child.

Prophets weren't the only well-known Mormons to spend time at the hotel, however. A very young Osmond family performed for large audiences in the hotel's fine ballrooms and even sang "Happy Birthday" to President David O. McKay there. 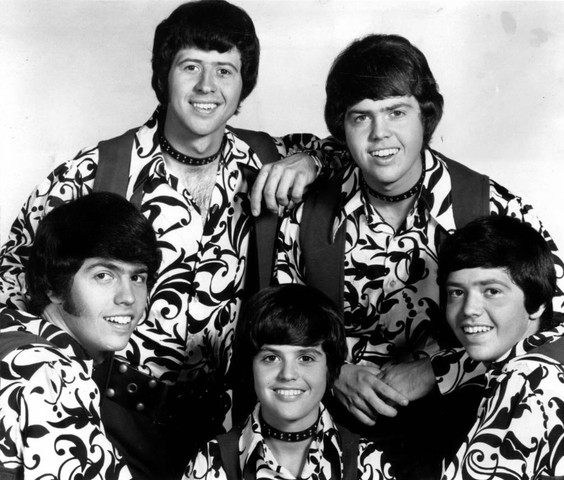 The hotel was not limited to the rich or the famous, however. During the holidays, it was a popular destination for locals, making a great place to rest and relax after hours of Christmas shopping downtown.

Perhaps one of the most peculiar features of the largely Church-owned building was the bar. To help members in Salt Lake City understand why the bar was allowed to be included in the hotel, President Smith addressed the topic in his October 1911 conference talk.

"The people who visit us want something to 'wet up' with once in a while, and unless it is provided for them they will go somewhere else, and instead of beholding and viewing the beauties of Zion they will go where they will see everything that is not beautiful and that which is not good."

He advised members stay way from the hotel and pointed out, "We are not responsible for the character of men who come here and are entertained in the hotel."

Though some members were critical of President Smith over the bar, he had spoken and voted against making Utah a "wet" state and didn't know about the plans for a bar until the enormous loan for the building had already been obtained.

In fact, President Smith became alarmed at the amount of debt the Church had been committed to. But Charles W. Nibley, who had secured the loan, tried to calm his fears by telling the prophet, "I'm going to build the largest and finest bar in the West in the basement of the Hotel, and will see that we will pay off every penny of that debt" ( pg. 470 Approaching Zion by Hugh Nibley).

And so it seems the bar ended up serving a double purpose of introducing more customers to the wholesome beauty of Salt Lake City as well as paying off the debt incurred from building the hotel.

Eventually, the enactment of Prohibition in 1920 closed the bar as part of the nationwide ban on alcohol.

Though it survived both world wars and the Great Depression, Hotel Utah's time as a world-class lodging came to a close after 76 years of first-class service.

The Church, which had slowly acquired more ownership over the years, finally had to either expend significant funds to update the "Grand Old Lady" and keep up with newer hotels or convert the historic building into something new. In 1987, the decision was made to transform the hotel into the Joseph Smith Memorial Building, in honor of the Prophet Joseph Smith. 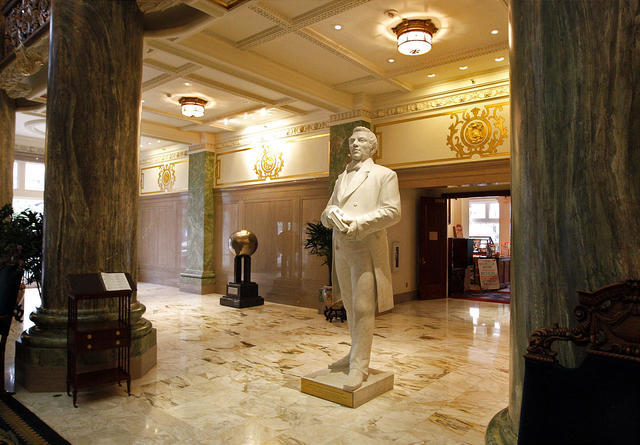 Today, many of the historic charms and high-class standards of the old hotel are maintained, even as chapels and office spaces, theaters, and additional restaurants have been added. This is definitely a building you'll want to take a peek inside the next time you're on Temple Square in Salt Lake City.