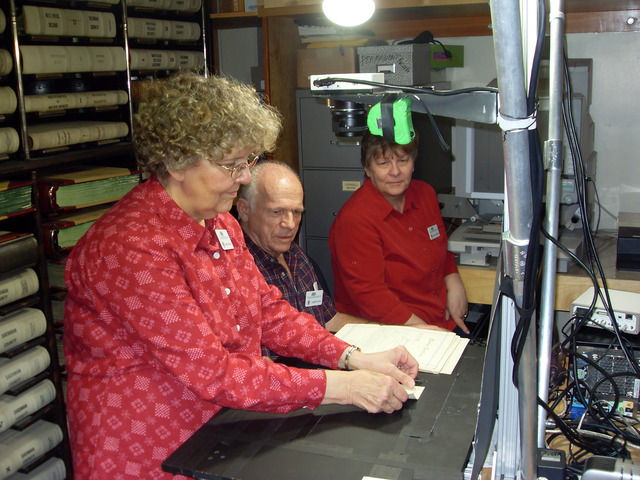 A New Type of Missionary: Seniors Called to Preserve Records for Temple Work

When they opened their mission call, the Heinekens were stunned—though it didn’t take long for them to learn why they had been asked to look through a bunch of old stuff high in the Pacific Northwest.

“We were very surprised when we opened our call, because our paperwork told us we would be in basements of a church,” Elder Heineken said. “It was quite a surprise, but it was just a great mission.”

The couple quickly gained an appreciation that saving historical images and records is “the first stage of temple work,” and they were glad to labor in the Washington Tacoma mission as records preservation missionaries.

Many types of records preservation assignments are available. Camera operators capture digital or microfilm images of valuable records in government, church, and private archives and records repositories. Indexers assist in creating indexing templates and helps to make it easier to find records in un-indexed digital collections. Scanning of digital images of books in various libraries is needed to make the books available online, while general document preparation is also requisite. Assignments may also include sorting records into a logical order, unfolding folded documents, removing staples or other bindings and flattening documents that have been folded for years.

The Heinekens needed to learn all of it, becoming more convinced along the way of the inspiration of their calling. They first felt blessed to learn how to preserve marriage records, birth certificates and pedigree charts of the first pioneers who arrived in the Olympia, Wash., area. They were able to even document children who had died before the age of accountability.

“How many knew about that [those specific people in those records]?” Elder Heineken asked. “There is no other record anywhere else, and now we can image them on the internet for anyone to find. That’s what’s amazing.”

Rod DiGiulio, vice president of the Global Records Division of FamilySearch International, explained that participating in salvation for the dead is a divine commission outlined in Section 2.2 of Handbook 2: Administering the Church. He noted that, as President Gordon B. Hinckley once said, it can even be done in pajamas.

Karma Tomlinson, the family history missionary coordinator, said that when it comes to blessing people’s lives, records preservation missionaries provide the means for thousands of individuals that are beyond the veil to hear and accept the gospel.

“Many of the missionaries have expressed wonderful and unique experiences while capturing images of records,” she said. “Many of these records have been buried in archives for hundreds of years.”

The Church has had digital records since 1938 and has since documented 3.2 billion images. The level of work has enabled a platform for missionary couples representing FamilySearch to present the purpose of the organization to U.S. congressmen. And the reverse has happened, too: the Council of State Archivists in February presented their Archival Advocacy Award to U.S. Senator and Latter-day Saint Orrin Hatch for “preserving the American historical record and ensuring its availability for use by all citizens of the United States.” Hatch is known to have collected enough documents from his tenure in Washington to fill two box cars.

Plenty of work remains, however. By DiGiulio’s analysis, the 3.2 billion documented images represent about 6 percent of “top priority records.” Given the current capture rate, it will take 140 to 160 years to make all of those records available. Consequently, the Church is making it a priority to increase the rate at which they are making those records available.

“There are a number of ways to do that—partnering with genealogical companies, putting more cameras out there, manning those cameras. But the most effective and economical way is to utilize the Lord’s storehouse, which includes time and talents of members of the Church,” DiGiulio said.

The demand is increasing and the pressure to move quickly mounting as records are destroyed by war, disaster or because some nations simply lack the ability to preserve them.

“We hear time and time again of people sorting through old books, several hundred years old, receiving a certain spiritual guidance and spiritual ability to it that is clarifying and enlightening,” DiGiulio said, adding that Elder Richard G. Scott said in the October 2012 General Conference that those engaged in the family history work will receive help from the other side. “I personally know of no better way to continually have a Spirit-enhancing sort of experience.”