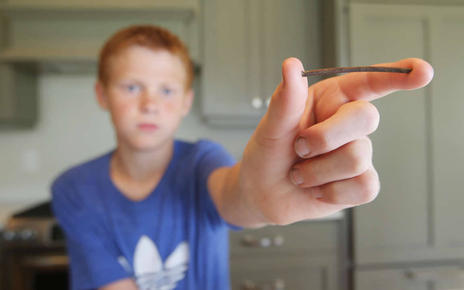 It’s a step up from catching your first pop fly. For a 12-year-old, mowing the lawn for the first time is just another stepping-stone toward your first shave.

And so it was for Abe Tullis, who had seen has dad mow the lawn many times before and had visions of opening up his own lawn mowing business with one of his neighborhood buddies.

Now it was his turn to power up the mower.

The backyard spread out in front of Abe that sunny Tuesday afternoon. He heared the lawn mower give a soft purr that grew to a mild roar. With a little push, he was off. He moved up the yard with ease, his pass done. But as he anticipated the turn to start row two, he heard a sound. Something dark shot out from under the lawn mower and hit him in the chest.