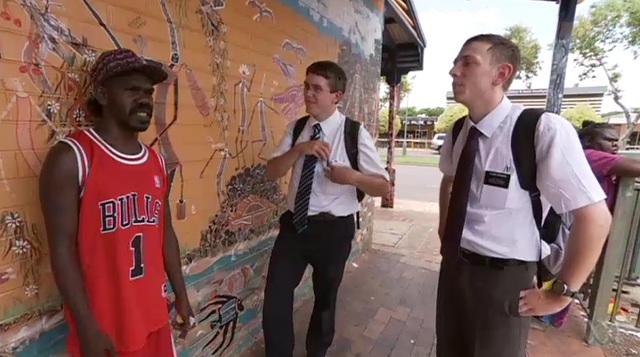 When Elder Connor Bennion from Perry, Utah, and Elder Matthew Nelson from Chicago, Illinois, set out to serve a mission in Australia's outback, I'm sure they had no idea they would end up on national TV.

But ABC's program Australia Wide featured the missionaries as they went about a typical day serving the Lord and others. While the day may have been ordinary for the elders—minus the TV cameras—reporter Stephanie Zilman couldn't help but notice the missionaries' dedication as she focused on the fact that these 20 and 21-year-old men sacrificed two years of their lives—along with hobbies, family, friends, education, etc.—to serve.

Elder Bennion and Elder Nelson, who were out tracting around Christmas time when the temperature can reach as high as 113 degrees Fahrenheit, showed their persistence as well as their concern as they tried to connect to the locals in Katharine.

The two struck a bit of luck when they met a man decked out in head to toe in Chicago Bulls fan gear, something Elder Nelson could relate with.

As missionaries often do best, both Elder Bennion and Elder Nelson shared why their message was worth giving up so much.

"I think that something we can always improve on is sharing our unique message of the Restoration of the gospel," Elder Bennion says. "We know that God still speaks to prophets today."

"Sometimes people don't know what makes us different—it's just another Christian church kind of thing. But we know that we have something special," Elder Nelson says.

From scripture study to preaching, Australia Wide followed every aspect of the missionaries' day.

"Personal study is personal for us. There are things that we need to improve on as well because we are human. We wish we were perfect, but none of us will be," Elder Nelson says.

Despite the heat, despite the frustration and discouragement, Elder Bennion sums it up best when he says, "We're on the Lord's errand . . . so if you do all that you can . . . you are going to be fine."

To watch the seven-minute portion that focuses on the missionaries in Australia Wide, click here.