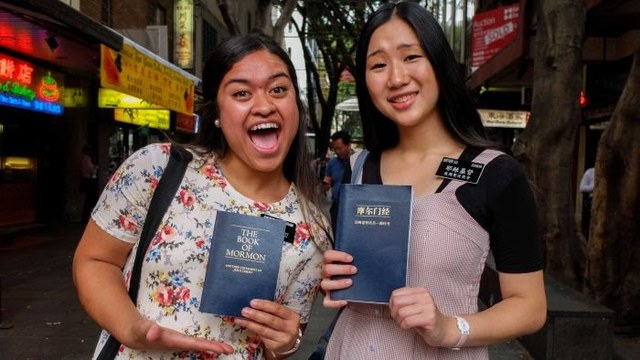 With the popularity of The Book of Mormon musical, many people are becoming interested in LDS missionaries and what their experience is really like.

Unlike Sister Wolfgram, who grew up in a Mormon household, Sister Lu entered the faith two years ago.

"My dad's family is Taoist and my mum's family is Buddhist, so I grew up believing a kind of like a mixed religion [which] is really common in Taiwan," she says.

Despite her family's religious convictions, Sister Lu spent her teenage years questioning her life's purpose. She sought guidance from a Buddhist monk, but was left feeling disconnected and lost.

It wasn't until a couple of Mormon missionaries approached her in the street that Sister Lu discovered her faith in God.

"They changed my life and my view of the world, so that's why I chose to be baptised and I wanted to be a missionary like them," she says.

"I know there are a lot of people like me who [don't] know who Jesus Christ is, so we get to find those people and help them know more about that."

Read the rest of this story at abc.net.au