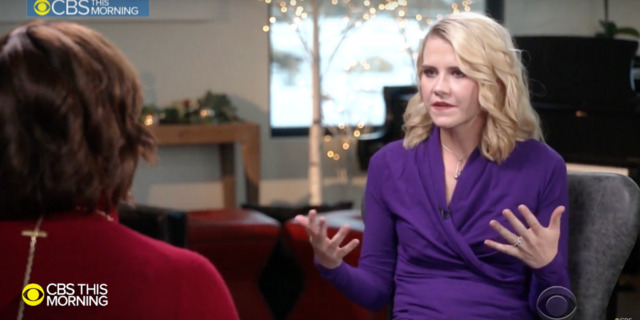 After Recently Being Sexually Assaulted on an Airplane, Elizabeth Smart Is Determined to Fight Back

Elizabeth Smart had always felt safe on an airplane until last year when she woke up from a nap on a plane to a man rubbing in between her legs on her inner thigh.

On Thursday, Smart shared her story with CBS This Morning.

“I was shocked,” Smart told CBS This Morning. “The last time someone touched me without my say-so was when I was kidnapped—and I froze. I didn’t know what to do.”

For Smart, who speaks to women around the world about how it’s okay to say “no” and it’s okay to take care of themselves, she felt surprised to not know what to do in this situation.

“I kept saying to myself, ‘You’re Elizabeth Smart. You should know what to do.’”

Smart reported the incident to Delta Airlines. She said they were appalled that it happened and have helped her with the ongoing investigation. Smart wanted to be clear that the man is at fault, not the airline.

► Related Content: Elizabeth Smart: Becoming a Mom Has Been the Best Thing Ever

Though she experienced a traumatic kidnapping as a youth, Smart said she has found happiness, especially with her family of a husband and three children.

“What a lot of people don’t understand is that there is a big difference between rape and sexual assault—and loving and gentle and consensual—most importantly—intimacy. There is a difference,” Smart said.

Watch Smart’s interview with CBS This Morning Below. Note: There is an instance of language by anchor Gayle King near the 6:53 mark.