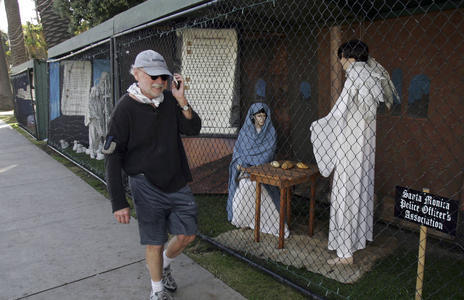 After more than a half century, Santa Monica Nativity display is no more

After nearly 60 years in picturesque Palisades Park, the religious community's traditional Christmas Nativity tableau has a new space in the industrial park of this coastal city west of Los Angeles.

The new locale was made certain Thursday when a federal judge dismissed a lawsuit attempting to preserve the Nativity display in its historical public park setting.

"The Grinch hasn't stolen Christmas. He has stolen our liberty. That's something that should concern everyone," said William J. Becker Jr., lead counsel for the Santa Monica Nativity Scenes Committee, which sued the city in October alleging a violation of free speech rights.