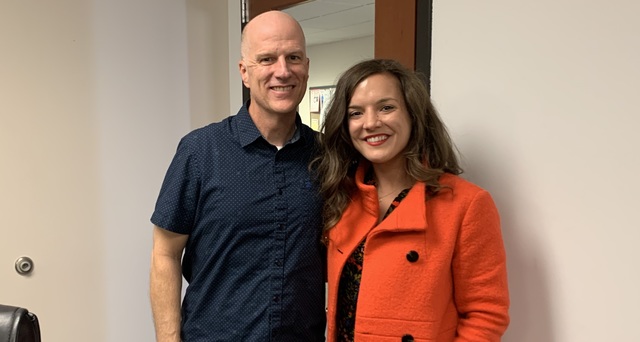 All In Podcast: Learning How to Forgive From the Savior

In his book, Let it Go: A True Story of Tragedy and Forgiveness, Chris Williams recounts a tragedy that happened one February night when he, his wife and family of four were hit by a 17-year-old drunk driver on the road. The car accident took the life of his wife, his unborn baby, his 9-year-old daughter, and his 11-year-old son. Through this difficulty, though devasting for Williams, he chose to follow the example of the Savior to forgive Cameron, the 17-year young man, and find room for healing. In this week's episode, All In host Morgan Jones talks with Williams about what he was able to learn from this experience, to "let it go" and move forward despite the loss of his family.

Morgan Jones: Many people listening have probably heard your story or seen the Mormon Message. I guess that those probably have a name change now, huh? But they've probably watched that video, but for those who have not, now 12 years later looking back, what are kind of the biggest things that stand out to you from that night?

Chris Williams: So the first thing that stands out is how quick the Savior was to succor me as one of His believers. And to "succor" means to run to with assistance or aid. And so that was amazing that in the middle of that grief, that immediate grief that came, just knowing that my wife and the baby that she was carrying and that two of my three children had passed away. In that instance, to have the Savior come to me and in three words, which were presented to my mind, I think, "let it go." In that moment to ask me, through those three words, if I was going to have faith in Him to be healed. So He was there on the scene, the first responder ready to go ready to heal, but before he could do anything, he had to do it just as He healed anciently, which was to see if there was faith and see if there was going to be a belief. So I was asked, I believe, through those three words, if I was going to let it go and have faith to be healed in Christ's way, or if I was going to try and heal myself in some other way. And so when I committed then and there in the car to do exactly that, to let it go, have faith in Christ to be healed in his way, the peace came immediately. So that was one of the first things that just absolutely, in looking back in retrospect, is so amazing, is how His power for sure, and His grace, His enabling power, but also His mercy. How quick He is to bless us when we're ready and when we desperately need those blessings.

Chris Williams: The second thing I learned which was kind of a surprise learning, actually, was the worth of a soul. Because in that moment, as soon as I let it go, as soon as I felt the peace towards my wife and my children and that everything was going to be okay—and I heard my son Sam cry out, and I knew he was injured and I didn't even know where my oldest boy was—I found my mind not even thinking about that. So here I am getting put onto a backboard, I'm getting put down, I'm getting emergency response. I've got severe pain in my body and get my mind is focused increasingly on the one individual that night that's really in danger. The one individual that the Savior is worried about and that's the young man that was driving the other car. And I just think it's interesting in looking back how I felt the Savior's love towards that individual, that young man. And yes, He was there to help me. Yes, He was there to make everything okay and to start to heal me. But the next invitation after I let it go was, would I help Him in bringing this young man home? I guess at the very least He didn't want me to oppose that or fight it, which is part of that forgiveness that everyone extolled so much. But really, I think the miracle that night is the mercy and love that He has for the one. And it was my blessing, my privilege, my honor to feel and have a witness of that mercy towards the worth of the soul that He has towards the one. If there's one witness, one testimony, one concrete thing I can say I absolutely believe and know to be true, and if I could only have one in this life, I just feel so happy and blessed that that's my witness: is that Christ loves the one. And that the worth of that soul for Him is just more than I can describe in words and more than I can even comprehend. It was overpowering and overwhelming just to feel how much He wanted that young man to come back. And so that's really what this last 12 years for me have been about and doing these podcasts and anything else I can do is just to witness to the world that Christ paid the price for the one. For you, for me, for everyone. And in a way that, you know, I can't explain and I can't really comprehend. But somehow, He just knew each and every one of us so individually, so perfectly, that when He went into the garden and prayed, He did it for us, for you, for everyone. Not just for a big old group, but He knew everyone individually. And for me to feel that love that He had just for that one individual, it changed everything. It changed my perspective and it's changed my life.

Morgan Jones: Chris, I love something that you said following the accident and I want to focus on this idea of forgiveness, just because I think it's so beautiful. But you said, referring to Cameron, "He should know it was merely the Savior working through me. I had put myself in a situation to be a vessel through which the Spirit, through which His example, through which His knowledge, His intelligence, His brilliance could shine. That's really all I had to do was just not get in the way of that. I wanted him to understand that I really didn't have much to do with any of the goodness that has come out of that." And I think that's what you just reiterated, is that this was not about you. It was about the Savior working through you to forgive this young man. You first saw Cameron following the accident at a hearing that was to determine whether or not he was going to be tried in juvenile court, or in a regular adult court. What do you remember about when your eyes met Cameron's?

Chris Williams: So when our eyes met, he immediately started mouthing the words "I'm sorry" to me. And of course I didn't hear that because we were separated, but I knew exactly what he was saying. And I think, more importantly, I knew that he was sincere. And I also knew that the forgiveness and mercy weren't contingent on him being sorry in that moment. So prior to that hearing, you know, I had a wonderful experience just once again, with this with the Spirit in being taught about this mercy and love that Heavenly Father has for the one and the Savior has for the one, is that He also has patience. Divine, wonderful, glorious patience. And that I knew that if Cameron, in that moment, wasn't ready to really feel remorse or to desire to change his behavior or to do anything like that, like even express sorrow, you know, an apology, that eternally, it would all work out. There would be a time, in other words, where he would feel that. And so I think that was a wonderful preparatory experience just to know that the Savior has the patience for us. And I say that because there's a lot of people that when they forgive, they want to see that, they want to see kind of the—and they don't get it oftentimes. They get people that aren't willing to change, that just dig their heels in and they continue to offend or continue to do things that aren't right. But our forgiveness doesn't have to be contingent upon that whatsoever. It was a blessing that Cameron did that in that situation and that he was starting to kind of move forward and wanted to move forward. Because I think that opened us up then to have further conversations and to, you know, to invite him to let it go and to move forward in his life as well. And to see that blessing of the worth of the soul and the progress that he could have on this side of the veil.